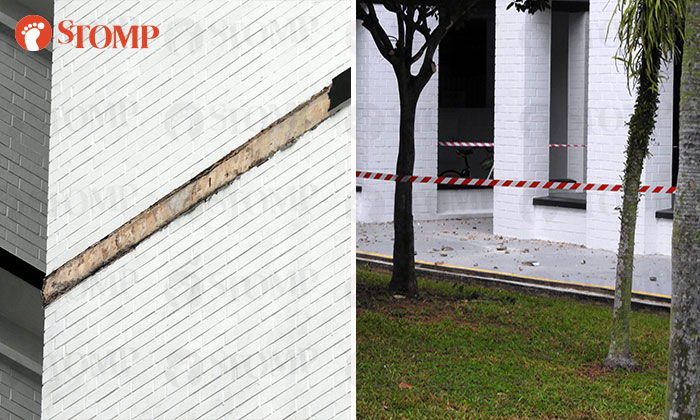 The concrete skirting of a Housing and Development Board (HDB) block in Tampines fell off on Saturday morning (June 16).

Stomper Tow was having a morning jog at the Tampines Park Connector at about 8am when he noticed a small crowd at the foot of Block 495B Tampines Avenue 9.

He approached the crowd, curious to see what had happened.

“A small area had been cordoned off and there were two police officers. Some of the people were looking up and pointing.

“I took a closer look and realised that the concrete skirting had fallen off the 9th floor. There was debris all over on the ground.”

Tow who stays at an HDB block nearby told Stomp that he was worried about the public’s safety especially after such an incident.

“Previously some other concrete feature also collapsed here in Tampines back in 2016.

“I am quite worried.”

In response to a Stomp query, a spokesman for Tampines Town Council said that it was alerted to concrete skirting which had fallen off Block 495B Tampines Avenue 9 at 7.10am on June 16, 2018.

"In view of public’s safety, the area was cordoned off immediately.

"The debris has also been cleared away that morning. The Town Council would like to assure residents that the dislodged skirting is part of the façade’s decorative design and the structural parts of the building are safe.

"Tampines Town Council is investigating this incident and we will also be checking on the other buildings with similar design. Rectification works are underway and a certified professional engineer (PE) has been appointed to assist the town council.

"We would like to apologise for the inconveniences caused to residents during this period."