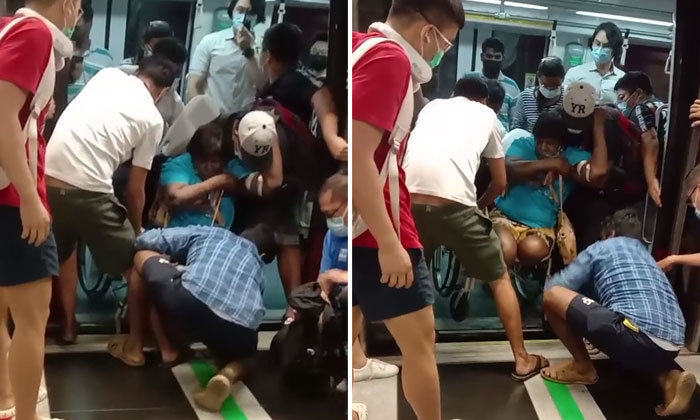 A woman’s wheelchair got stuck in the platform gap at Botanic Gardens MRT station earlier this week, as commuters rushed to her aid and pulled her to safety.

The incident occurred on Jan 2 at around 4.40pm, when the front wheels of the device got caught in the narrow gap between platform and train.

As the wheelchair tilted downwards, the woman held onto a passenger behind her to keep from falling off her seat. Another commuter then activated the train’s passenger emergency button.

A TikTok user shared a video of commuters helping the woman. In the video, two men are attempting to pull the wheels out of the gap, while others are trying to hold the train doors open.

The train stopped at the station for about 3 minutes, TikTok user Sakil Khan said, which was enough time to prise the wheels out of the gap.

Speaking to Mothership, Mr Ng Chan Cheok, head of SMRT circle line, said it was only after the wheelchair user said she was alright that the train service resumed.

"We would like to thank all the commuters who helped (with the situation),” said Ng. “It is heartwarming to see such a shining example of caring for one another in our community.”

Ng has encouraged those with special mobility needs to approach SMRT staff for assistance with boarding and alighting from trains.