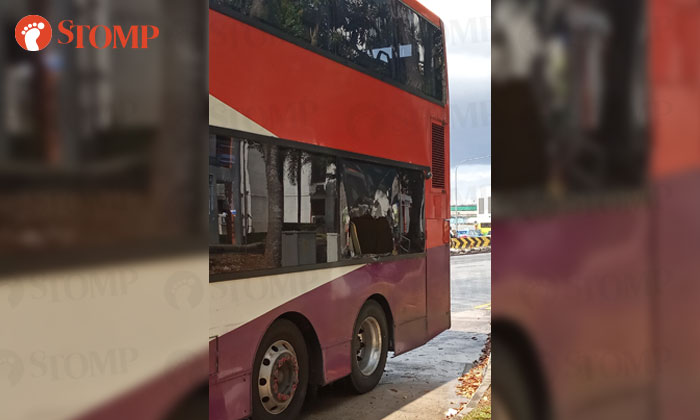 Stomper Saiful was riding on bus service 161 along Woodlands Avenue 2 on Monday (Dec 31) at about 1.50pm when he heard a loud crash.

He soon discovered that a PVC pipe had hit the side of the SBS Transit bus he was in, shattering a window.

"Everyone was in shock," Saiful said.

"There were workers carrying a pipe at a construction site near the road when the pipe swung and hit the bus.

"The bus captain later went to the upper deck to ask me if I'm okay.

"Everybody on the bus then alighted to take a look at the bus.

"I was shocked when I saw the bus's window was damaged."

Saiful told Stomp that nobody was injured and soon afterwards, the passengers boarded another bus to continue on their journey.

"On 31 December, a Service 161 bus was hit by a PVC pipe when it was passing by a construction site along Woodlands Avenue 2.

"This caused a window on the bus to be damaged and the bus journey had to be disrupted.

"Fortunately, no one was hurt in this incident."