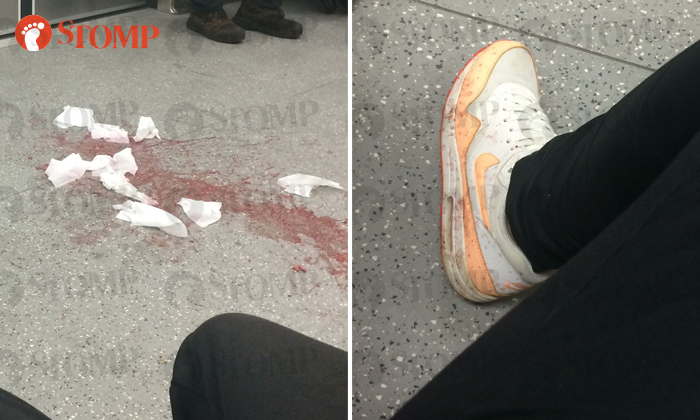 A man vomited on the train at around 11.50pm on Saturday night (Dec 16), leaving behind a disgusting mess after he alighted.

Stomper Anonymous witnessed the incident on the North-South Line.

According to her, the man was already on the train when she boarded it at Somerset MRT Station.

She said: "I believe this guy was in his late teens and had been drinking.

"He was sitting on the floor but upon reaching Ang Mo Kio MRT Station, he stood up and puked. Right after that, he alighted.

"At that moment, the commuters -- including myself -- were disgusted with the sight of the puke and the pungent smell.

"The guy was probably too drunk to say a word, yet he seemed to walk fine. His friend was simply laughing at him, and did not offer any help."

Anonymous was horrified when she realised that the vomit had also stained her shoes.

She added: "This behaviour utterly disgusted me and I am truly upset at how dirty my shoe turned out to be.

"I hope the culprit is reading this article. Guilty yet? FYI, I did not wear a shoe for you to puke on it. I also feel that it is unfair for me to clean it, even though it is my shoe. I also do not believe that throwing away the shoe is the only solution."

She told Stomp that another commuter then placed tissue paper over the vomit.