Commuter disgusted by woman pulling down mask to 'spit' on MRT train: 'I can't tolerate this unhygienic behaviour' 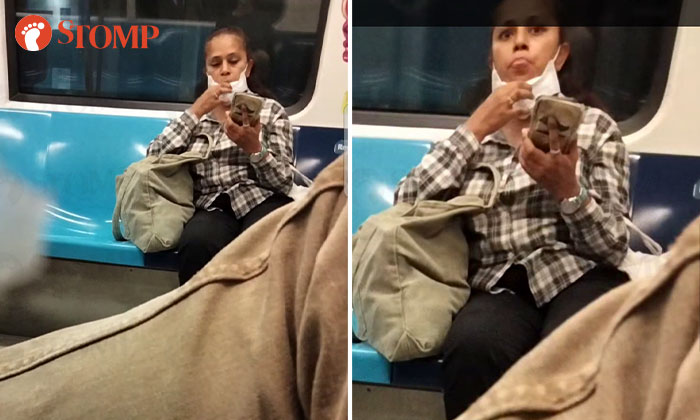 The woman in the video has come forward to share her side of the story.

"I am the person concerned," she said.

"I had a lung infection and had coughed a little.

"The Stomper is exaggerating.

"There is no way that the saliva had hit him as he was sitting on the opposite part of the MRT train.

"At that time I was not able to breathe as well."

A commuter was disgusted by a woman who repeatedly pulled down her mask to spit on an MRT train on Dec 15.

Stomper Ryan shared a video he took of the woman as he was riding a train on the North-South Line at about 7.58pm.

"I was on the train from Yio Chu Kang Station towards Bishan Station when I noticed a lady who kept pulling own her mask and from what I observed, seemingly spitting again and again," he said.

"The video was taken after around 15 seconds of observation but I stopped when the train ended services at Ang Mo Kio.

"Call me a busybody but I can't just tolerate this kind of unhygienic behaviour, especially because of Covid-19.

"I showed this video to an SMRT employee who was ushering passengers and told her why I recorded and made sure she knew where the 'spitting lady' was, hoping to remind her not to do that again but I do not think she caught up with her as the next train arrived in about 30 seconds."

Ryan also shared with Stomp a copy of his medical certificate (MC) he received after falling ill the next day (Dec 16).