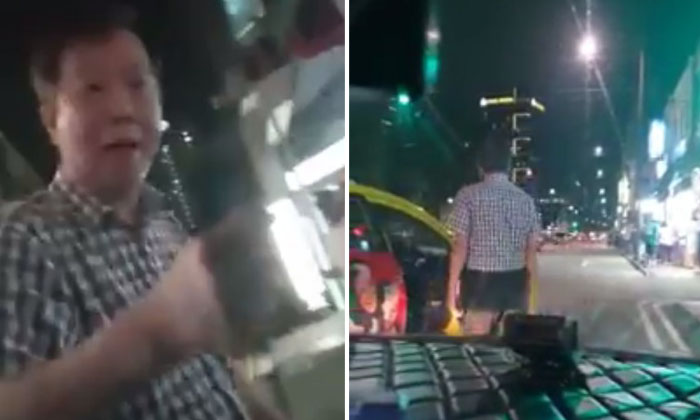 A taxi driver was captured on camera hitting the window of another vehicle and trying to open its locked door.

A video posted by Facebook page ROADS.sg on Dec 17 also shows the taxi driver asking another motorist to alight from his vehicle.

According to the driver narrating the video, the incident took place on Dec 14 at 7.41pm along Baboo Lane in Little India.

The video first shows the taxi driver, who had stopped his taxi along the road, hitting the window of the motorist's car.

The caption of the post states: "This video shows only half of the story here, first part missing."

This video shows only half of the story here, first part missing.

What provoked the cabby only both of them know. But...

The taxi driver gets back in his taxi and drives forward, before stopping his car again.

He exits his taxi and punches the window of the driver's vehicle, asking him to come outside.

He then tries to open the locked door of the vehicle and punches the window again, before getting back in his cab.

The video ends with the vehicle driving past the stationary taxi.

In response to a Stomp query, Ms Tammy Tan, the Group Corporate Communications Officer of ComfortDelGro Corporation Limited, said: "We will investigate the matter."

Many Facebook users took to the comments section to request for the full video of the incident to find out why the driver was so riled up.