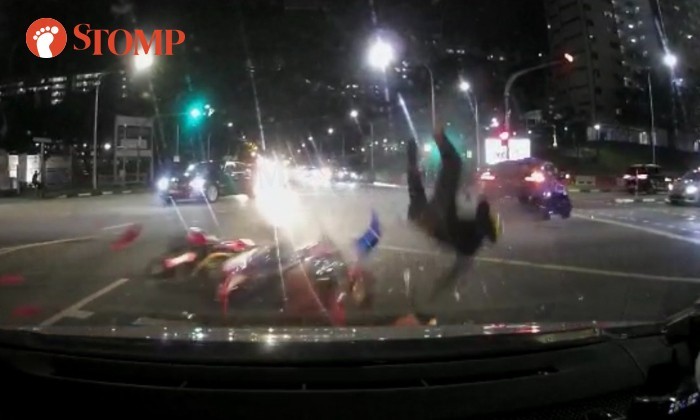 ComfortDelGro has taken stern disciplinary action against a taxi driver who hit a motorcycle at the junction of Bedok North Road and Bedok North Avenue 1.

The accident, which happened on Saturday (Oct 3), involved five vehicles and three people were taken to hospital.

Stomper Rohaizat informed Stomp about the accident and sent a circulated video taken from an in-car camera.

In the video, a taxi can be seen making a discretionary right turn when it collided with a motorcycle.

The video's timestamp shows that this happened at 10.25pm.

In response to a Stomp query, Ms Tammy Tan, Group Chief Corporate Communications Officer of ComfortDelGro Corporation Limited said: "We have been in touch with the motorcyclists and their families as well as the passengers on board our taxi since the accident and are assisting them the best we can.

"Such dangerous driving is disallowed and we have made it clear to the cabby that this will not be tolerated.

"We have taken stern disciplinary action against him and will be monitoring his performance."

The police also said in a statement that they were alerted to the accident at 10.27pm.

"Two male motorcyclists, aged 19 and 22, and a 31-year-old male taxi passenger were conscious when conveyed to Changi General Hospital," said a police spokesman.