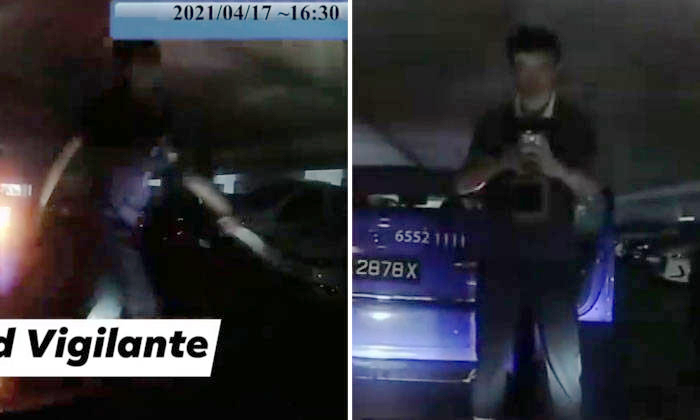 A ComfortDelGro taxi driver has been terminated after he was caught on video threatening another driver with what is believed to be a metal pole at a multi-storey carpark in Choa Chu Kang on Saturday (Apr 17).

A Stomper alerted Stomp to footage of the incident that was posted on SG Road Vigilante's YouTube page.

According to the caption, the incident happened at Block 815 Choa Chu Kang Avenue 7 at about 4.30pm.

The contributor said that the taxi driver drove "extremely slowly" after dropping off a passenger.

He then sounded his horn at him but it only made the cabby drive even slower.

"I then dropped my parents off at the rubbish cute area and he was waiting for me at the gantry," he said.

"He entered the carpark and blocked me at the second floor of the carpark, taking out his metal pole."

In the video, the cabby is seen approaching the other driver and later takes a photo of the other car before returning to his own vehicle.

Following the incident, another video emerged of the taxi with the same licence plate number in a dispute with another driver for allegedly sounding his horn at him as well.

In the video, the man recording the video can be heard saying: "I sibei (very) scared.

In response to a Stomp query, ComfortDelGro's group chief branding and communications officer Tammy Tan said: "We certainly do not condone such aggressive behaviour from our cabby and have terminated his driving agreement with immediate effect.

"We will also be making a police report and will assist the police in their investigations."