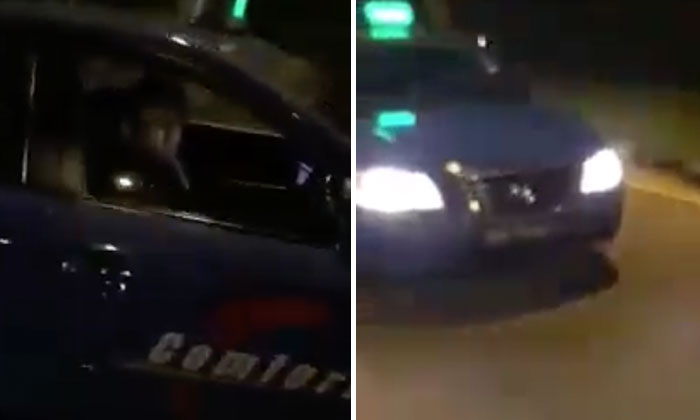 A ComfortDelGro taxi driver not only flashed his high beams at a motorcyclist, but allegedly showed the latter the finger and hurled vulgarities at him during a road dispute.

A video of the incident which happened at 8.55pm on Tuesday (July 10) according to the caption, was uploaded shared on various pages such as Reckless driver.SG.

The posts were all credited to Facebook user Amir Alkyd.

In his post, Amir wrote that he was riding in lane 2 along Loyang Avenue towards Tampines Avenue 7 when he spotted a speed camera and slowed down.

According to Amir, the driver of taxi SH7049Y who was behind him then flashed his high beams at him.

Amir said that the driver then drove up to him and allegedly flashed him the middle finger. However, this was not captured in the video which was uploaded by Amir.

Amir explained in his post that this was because this was because the video was taken after the cabby’s action. He also alleged that the cab driver had winded down his window and shouted vulgarities at him before he asked his pillion rider to take a video of the incident.

The video did, however, show the cabby recklessly swerving into the lane that Amir was in, before moving back into his own lane and driving off.

“Note to everyone, do take care and be safe whenever you're on the road. I tried to follow the road rules and still "kenna" by this kind of driver.”

Many netizens advised Amir to report the cabby to the authorities.

Others were more sceptical about Amir’s claims, due to the lack of evidence in the video.