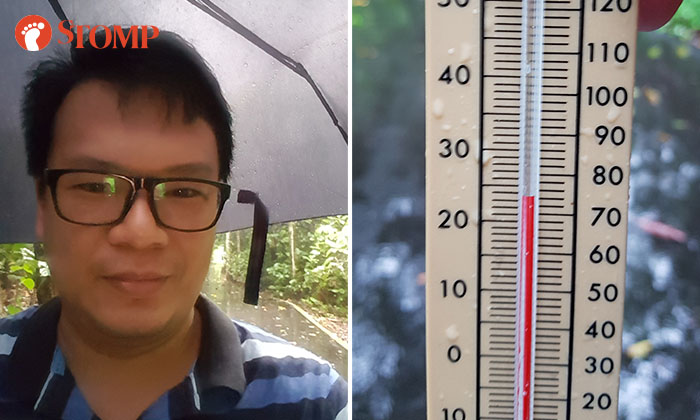 A Stomper brought his thermometer out to prove that temperatures have been lower and recorded 23 degrees Celsius on Saturday morning (Dec 14) while he was at Admiralty Park.

The National Environment Agency (NEA) said in an advisory on Nov 30 that people can expect lower temperatures due to the Northeast Monsoon season, where it could be as low as 22 degrees Celsius.

Stomper Samuel Lau was in his home at Marsiling Drive on Friday (Dec 13) when he started feeling cold.

He then fished out his thermometer and recorded the temperature.

Samuel told Stomp: "It was raining last night and I felt very cold, so I took my thermometer out because I wanted to find out the exact temperature.

"That's when I managed to see that it was about 26 degrees Celsius.

"Then I thought about wanting to find out how low the temperature could get as I've been reading some news about how Singapore is experiencing low temperatures.

"I decided to bring my thermometer out for my morning walk at Admiralty Park.

"I purchased the thermometer from Daiso and have had it for less than a year.

"It was about 9am when I went to the park today (Dec 14). This is my first time bringing the thermometer out.

"All along, I've only been using it at home.

"I go for a morning walk at Admiralty Park about two to three times a week and today, my thermometer recorded that the temperature was about 23.8 degrees Celsius.

"It was raining, slightly heavier than a drizzle.

"It was very pleasant and nice to walk in the rain.

"I really like the cold weather and I think it could be even colder if I had gone out earlier.

"I might go at an earlier time, maybe about 5am or 6am, to see how much lower it could be since the sun was already up when I went at 9am today."