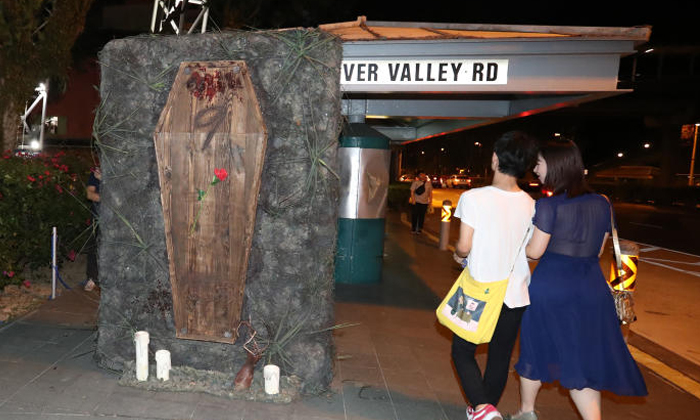 A coffin-like structure placed at a bus stop along River Valley Road has drawn mixed reactions from passers-by even after it was revealed to be a publicity stunt.

Standing at two-metres-high, the 'coffin' had what appeared to be blood stains, knife carvings, a red rose, and a crow on it. There were also candles on the ground.

A reader had complained to Lianhe Wanbao about how it was inappropriate to place a coffin by the roadside during the Hungry Ghost Festival.

When Wanbao reporters arrived at the scene, they realised that the structure was actually part of a publicity stunt by Universal Studios Singapore (USS) for its annual Halloween Horror Nights event.

Behind the structure was a poster for the ninth edition of the Halloween event, which will take place from Sep 27 to Oct 31 this year.

A 50-year-old commuter who was waiting for his bus at the bus stop on late Saturday night (Aug 3) said he got a fright after seeing the 'coffin'.

He told Wanbao: "It's very inauspicious to place a coffin on the street, especially since it's the Hungry Ghost Festival. It's better to be safe than sorry when it comes to such things."

However, several members of the public who were interviewed felt that it was a creative stunt and did not find it disturbing.

Zhang Xiangjie, 26, and his two female friends even went forward to touch the 'coffin' after seeing it.

He said: "It looks very realistic and reminds me of Halloween instead of the Hungry Ghost Festival. This is a western coffin and isn't the same one that Chinese people use."

Li Jintao, 27, added: "The 'coffin' is a little scary, but it does make me want to experience the Halloween event at USS."

This is not the first time USS has sparked controversy over its publicity stunts for its Halloween Horror Nights event.

In 2017, the theme park was slammed for creating three memorials dedicated to a non-existent disaster, which many found tasteless.

In that incident, a Resorts World Sentosa spokesman acknowledged the flak that the campaign had received, but said it had also generated a lot of conversations among people.

He pointed out that previous editions of the Halloween event had also successfully employed bus shelter displays, with Chinese talismans in 2016 and paper effigies in 2015.

Such installations aim to "creatively drive awareness in an eye-catching, original and unconventional way", added the spokesman.