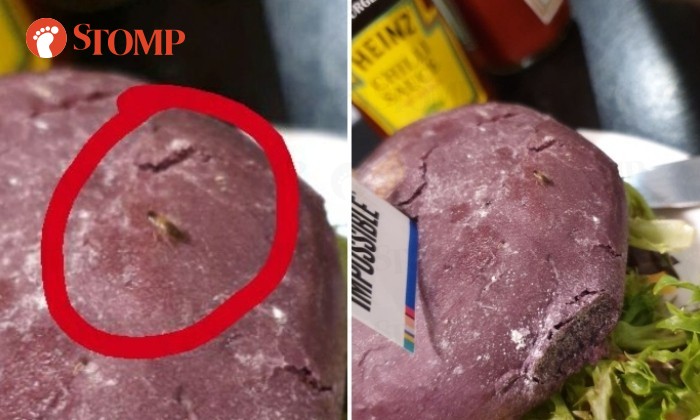 A man was disgusted after finding a cockroach nymph in a burger that he ordered from Fatboy's The Burger Bar in Holland Village on August 2.

Stomper Anonymous shared that he had ordered the Impossible Burger for his wife and found a cockroach nymph "crawling out of the vegetables that were wedged between the burger buns and the meat".

"The Impossible Burger really was impossible for my wife to consume as it left an awful feeling in her gut and made her lose her appetite," he said.

"I was afraid that it might leap away before we could alert the waitress, so I quickly snapped a photo of the quick-legged cockroach nymph roaming around the Impossible Burger.

"I asked the waitress to prepare a new burger for me after showing her the cockroach nymph.

"However, she did not apologise. She just returned the plate to the kitchen and came back with a new burger."

Anonymous said that he felt disappointed at how the matter was addressed and subsequently reported the incident via the OneService app.

When Stomp reached out to Fatboy's, a spokesman said it had dispatched its HQ team, who will be conducting a thorough investigation at its Holland Village outlet.

The spokesman added: "As we are not able to see the bug very clearly, we cannot confirm it is a cockroach. And if it is alive, we are very sure it did not come from the grill, as it would not have survived the intense heat.

"Nevertheless, it is a bug and it came from our plate, and we take responsibility for it."

"Coincidentally, SFA officers did a check on the Holland Village outlet the day the cockroach nymph was found and found the operations to be within the prescribed regulations.

"We pay very strict diligence to hygiene and cleanliness and we want to get to the bottom of this matter.

"We will also have a very stern word with our crew about handling situations and to inform the manager immediately of any mishaps.

"This is definitely an isolated incident but we will use all our means to ensure we avoid it in future."

In response to a Stomp query, a spokesman for SFA said: "SFA inspected the restaurant upon receiving feedback. We did not detect any infringements of our food safety and hygiene requirements during inspection.

"Nonetheless, we have advised the licensee to conduct regular pest control treatment and to ensure that the premises is free from pest infestation at all times."

SFA also added that food safety is a joint responsibility.

"While SFA puts in place and enforces the regulatory measures, food operators must play their part by adhering to good food hygiene and preparation practices," they said.