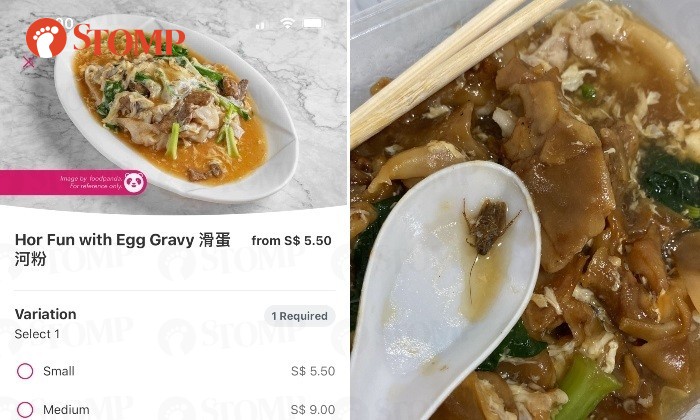 Ching Hao Wei said that it would "clean up the kitchen well' at its Clementi stall after a Stomper found a cooked cockroach in the hor fun he ordered from the stall via Foodpanda on July 23.

Stomper Jamie paid $5.50 for the hor fun with egg gravy. He also ordered a fried rice and a sliced fish soup.

Sharing a photo of the insect with the food with Stomp, he said: "Utterly disgusting and we did not dare to eat the rest of the food since it was coming from the same kitchen."

He said that Foodpanda had fully refunded the order and he would not order from the stall again.

In response to a Stomp query, Ching Hao Wei said: "We have reached out to the customer to discuss the issue further in private.

"Our management went to the outlet for investigation and arranged staff with a schedule to clean up the kitchen well.

"We are trying our best to do everything to fix the problem that the customer experienced."

After Ching Hao Wei's response, Jamie told Stomp: "Yes, Ching Hao Wei did send an e-mail to me BUT it was more of informing me what they’ll do instead of discussing the matter. They even quoted in the e-mail that 'the cockroach that accidentally fell into the food'. It’s obvious and clear that the cockroach was COOKED in the dish. Hence, I don’t think their response should be that way."

When contacted by Stomp, the Singapore Food Agency said that it has received the feedback and is investigating.