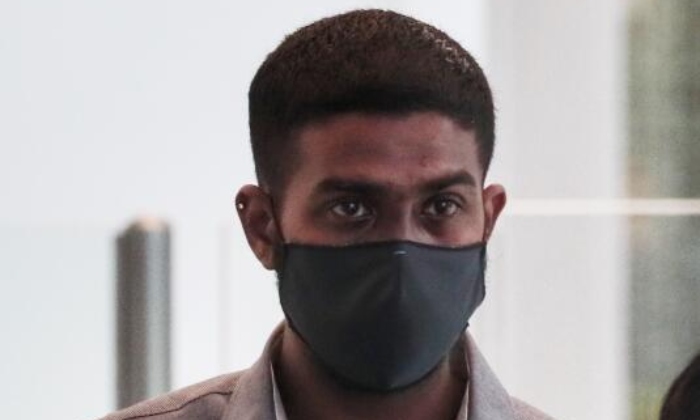 The trial of a Central Narcotics Bureau (CNB) officer who was accused of assaulting a man several times to extort a drug confession began on Monday (Nov 23).

The officer, Vengedesh Raj Nainar Nagarajan, 33, denied allegations of voluntarily causing hurt to get a confession from Malaysian Sivabalan Kanniappan in 2017 after he was found with drugs on him at Woodlands Checkpoint.

Vengedesh has been suspended from service since Oct 5 last year.

On Monday, Deputy Public Prosecutor Han Ming Kuang said Vengedesh, then a corporal with the CNB, was called in for additional support at about 5am on Jan 2, 2017.

He allegedly took Sivabalan, 34, to the toilet at the Woodlands Checkpoint CNB Block B office on the third storey on three separate occasions to extort a confession.

The prosecution called three police officers as witnesses to stand on Monday. One was involved in filing the first complaint against Vengedesh while the other two were the investigating officers who handled the case.

The prosecution plans to call another 15 witnesses, including CNB and police officers, and rely on closed-circuit television (CCTV) footage, photographs and diagrams of the CNB Woodlands office, and statements from Vengedesh, among other evidence to make its case.

The court heard that Sivabalan was found guilty of drug offences and is serving a 15-year jail term. He was also sentenced to 13 strokes of the cane.

According to court documents, between 5.58am and 6.14am on Jan 2, 2017, Vengedesh allegedly kicked, punched and slapped Sivabalan to get him to confess that he knew about a bundle of drugs found in his raincoat bag.

Between 8.35am and 8.43am, Vengedesh is said to have kicked and punched him again to get him to confess the bundle of drugs contained heroin.

The third assault is said to have taken place between 9.28am and 9.30am to make Sivabalan confess he knew about a second bundle of drugs.

If convicted of the offence, Vengedesh can be jailed up to seven years and fined or caned for each charge.