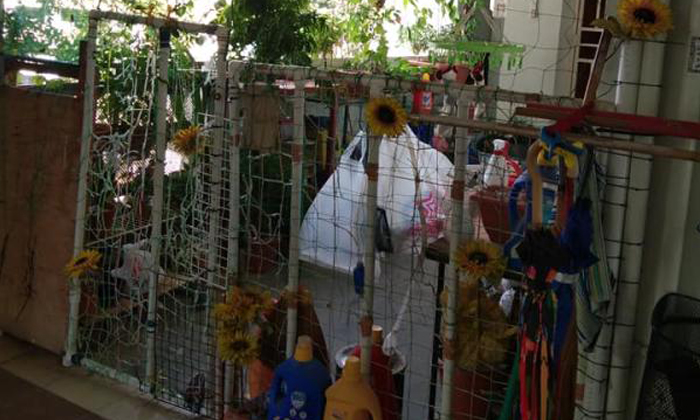 A resident has explained the purpose of a makeshift gate on the sixth-floor corridor of Block 151 Woodlands Street 13 following complaints of clutter.

In a report on Feb 8, a Stomper shared several photos of the clutter on multiple storeys of the block and raised safety concerns.

He also said: "On Level 6, the residents have set up a so-called gate at the corridor."

Marsiling-Yew Tee Town Council later told Stomp in a statement that residents were in the midst of assisting to remove the clutter.

According to Shin Min Daily News, the decision to set up a makeshift gate was made by two households at the block.

Mr Zhang, 55, said that his neighbour's pet cat often made a mess out of the soil from his potted plants, even entering his unit to pee and poop, leaving both parties frustrated.

After being advised repeatedly, his next-door neighbour eventually set up a gate to prevent the cat from going over.

According to Mr Zhang, his neighbour erected the gate three years ago after consulting the Town Council, which apparently allowed the structure as long as it was made from approved materials.

"We used plastic pipes, wooden planks and plastic nets to create the gate. It can be pushed open very easily and would not obstruct the escape route in the event of an emergency," he added.

Mr Zhang also emphasised that the decision to set up the gate was made to maintain the harmony and neighbourly ties between the parties involved, even if it meant an inconvenience when passing through the corridor.