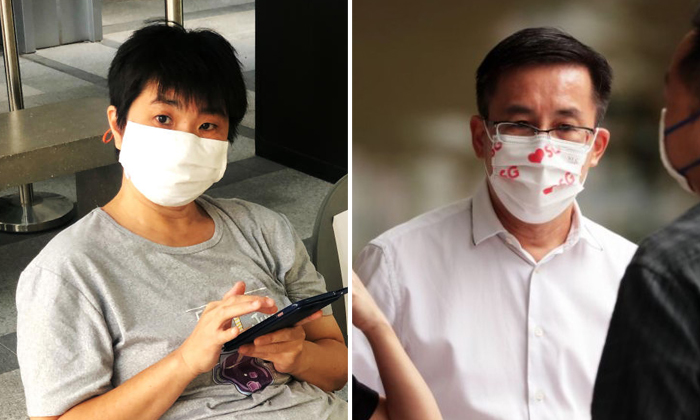 Ang Poh Lay, 47, who was a clinic assistant at Tan & Yik Clinic & Surgery, was sentenced to nine weeks' jail.

She pleaded guilty to one charge each of cheating and using illegally obtained personal information.

Between March 1 and 7, she illegally retained the personal details of eight patients from the clinic's records and used them to redeem the masks.

The court was told she selected patient information belonging to those she thought were already dead as she had previously successfully used her late mother's IC number to redeem masks.

Ang later admitted she used the records of a total of 26 patients to redeem mask packs.

Her home was searched and 20 mask packs were found. She claimed she had already used six of the packs.

David Chin Sing Chuin, 59, who was previously a property agent with PropNex, was sentenced to one week's jail.

Between March 1 and 14, he used IC numbers belonging to 11 of his clients to illegally redeem masks.

One of his clients made a complaint to PropNex on March 22.

When confronted, Chin told his then employer that he had used his clients' IC numbers to redeem mask packs on only one occasion.

PropNex terminated Chin and said they do not tolerate such behaviour.

A total of 10 masks were recovered from Chin.

One of the clients had asked for his mask to be returned and Chin later mailed it to him.

Ang and Chin are both out on bail and are expected to surrender themselves on Tuesday and Thursday respectively to begin serving their sentences.

The police previously said they will spare no effort in apprehending those who cheat to redeem masks.

Those convicted of cheating may be jailed for up to 10 years and fined.

Related Stories
Woman forged retrenchment letter to get Covid-19 Support Grant, cheated MSF of $4k
Man cheated woman of $5k of woman by posing as medium, scammed others of donations
Woman took over $1.4m from company she worked for and 91-year-old friend with dementia
More About:
illegal
Covid-19