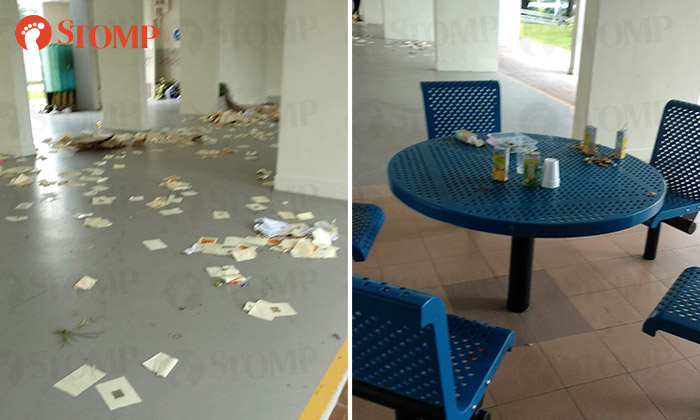 Jurong - Clementi Town Council has responded to an incident where a Clementi resident complained of a mess left at Block 371 Clementi Avenue 4 void deck after a funeral wake.

Stomper M, who resides on the 11th floor of the same block, was returning home at about 5.30pm on Tuesday (Dec 10) when he chanced upon the mess.

He contributed photos of what he saw and told Stomp: "I noticed the mess when I saw three cleaners sweeping there.

"I don't know the people who were utilising the space.

"I've been living here for about six years and this is the first time I'm seeing this.

"I was quite shocked, and I felt angry and disappointed that others won't pick up after themselves.

"I send my condolences to the bereaved but they should still clean up after themselves and not waste taxpayers' money by leaving such a mess behind.

"Such actions shouldn't be condoned and the town council should take disciplinary action against these irresponsible individuals."

In response to Stomp queries, a Jurong - Clementi Town Council spokesperson said that residents should clean up the communal space after using it.

The spokesperson added: "Fortunately, the situation reflected in this case is in the minority.

"Occasionally, when our field teams come across a similar situation, we will contact the applicant to let him know that we are aware of the untidy situation after he utilised the communal space."