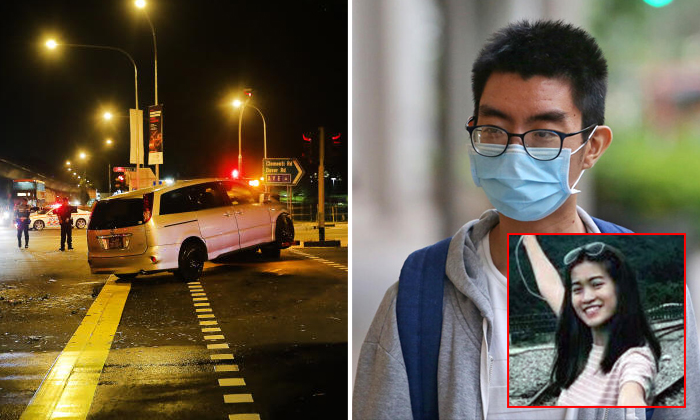 One of the four passengers in a taxi involved in an accident at a Clementi road junction two years ago, that left one of them dead, has sued both the cabby and the driver of the oncoming car for negligence.

National University of Singapore (NUS) student Ting Jun Heng was the centre rear seat passenger in the taxi at the time, sitting beside fellow undergraduate Kathy Ong Kai Ting, 19, who died in the accident.

Mr Ting, 23, who now walks with a slight limp and has a speech impediment, is seeking unspecified damages from former cabby Yap Kok Hua, 56, and Ng Li Ning, 23, the driver of the Nissan that crashed into the taxi.

A four-day trial to determine liability opened in the High Court on Tuesday (June 16).

Damages will be assessed separately and will be borne by the defendants' insurers.

The two defendants have pleaded contributory negligence, alleging that Mr Ting was not wearing a seat belt at the time and was partly liable for his own injuries.

Both defendants have also engaged accident reconstruction experts to testify on the speed of Ng's car.

Mr Yap's expert, Mr Neil Mackay, estimated that speed was between 87kmh and 93kmh at the point of impact; while Ng's expert, Mr John Ruller, estimated the speed to be between 74kmh and 82kmh just before impact.

The speed limit is 70kmh.

Their destination was Tembusu College at NUS.

The cabby was making a discretionary right turn at the junction of Commonwealth Avenue West and Clementi Road when Ng's car, coming from the opposite direction, crashed into the taxi.

Mr Lim Jin Jie suffered bleeding in the brain and a spinal fracture, while Mr Zon Lim, who was seated in front, suffered a brain injury. Both men, who were 22 that year, were hospitalised for eight days.

Mr Ting suffered traumatic brain injury and arrived at the hospital in a vegetative state.

In August last year, Mr Yap was jailed eight weeks after pleading guilty to causing Ms Ong's death and causing grievous hurt to the three other passengers by his negligent driving. Ng was charged with dangerous driving, and his case is pending.

In his civil suit, Mr Ting said he could not recall the events of the accident but believed he was wearing a seat belt at the time.

His lawyer, Mr Ramasamy K. Chettiar, said in his opening statement that a passenger need not prove liability against either driver.

Court papers state that Mr Ting has incurred - and continues to incur - medical and other expenses that stood at about $116,000 as of March last year, when the lawsuit was filed.

Mr Yap's lawyer, Mr Teo Weng Kie, argued that Ng drove in a "particularly egregious manner, with blatant disregard for the safety of himself and those around him".

The lawyer said video evidence showed Ng's Nissan car was going at high speed and narrowly missed another vehicle just before colliding into Mr Yap's taxi, which then spun a few times.

Mr Teo said the cabby could not have taken any evasive action, given Ng's speed.

Ng's lawyer, Mr Anthony Wee, argued that his client had the right of way. He said the taxi suddenly encroached into Ng's path and the car driver was unable to stop in time.

The Straits Times understands that the family of Ms Ong has not filed a suit to date. The other two passengers have filed suit in the State Courts and their cases are pending.