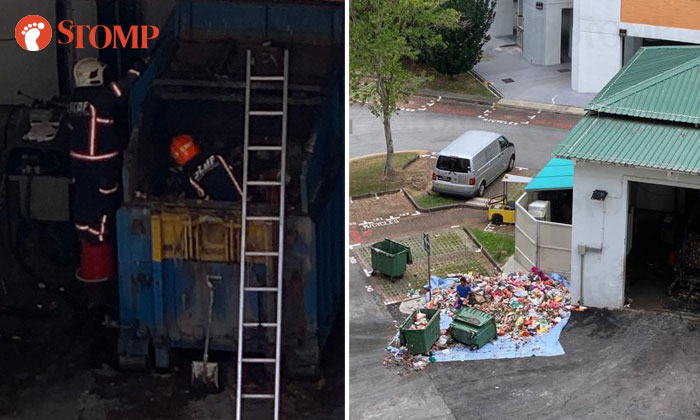 A fire broke out at the rubbish collection centre at Block 311 Jurong East Street 32 on Wednesday morning (Feb 13).

Stomper Aloysius alerted Stomp to the fire and shared photos of the Singapore Civil Defence Force (SCDF) officers at the scene.

"Before the SCDF arrived, I saw cleaners trying to put out the fire," he told Stomp.

"I was concerned because some of them entered the garbage compactor which can be very dangerous."

In response to a Stomp media query, an SCDF spokesman said they were alerted to the fire at about 11.26am.

"The fire, which involved the contents of a rubbish collection centre, was extinguished using one water jet," the spokesman said.

No injuries were reported and the cause of the fire is under investigation.

Aloysius also shared a video with Stomp showing cleaners emptying out the rubbish bins onto a tarp and sorting through it.

"I think they were checking that there were no other flammable items like cigarette butts in the rubbish before putting it in the compactor again," he said.

"It's a good initiative on their part but I think residents can help by making sure they don't throw flammable items into rubbish bins.

"I just want to raise awareness because rubbish compactors are very dangerous and nobody should enter them for risk of getting crushed."