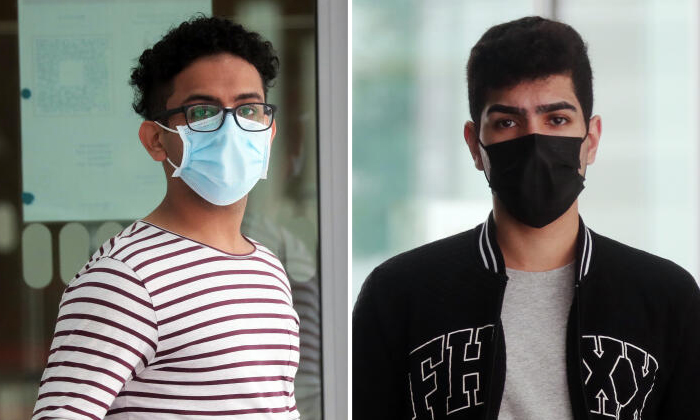 Two of the men accused of breaching Covid-19 rules by attending a New Year's gathering in Clarke Quay were handed an additional charge each on Tuesday (Feb 8).

Verma Pulkit and Harjaz Singh appeared before a district court and were accused of attending a gathering near Read Bridge, located outside Riverside Point in Clarke Quay, for a common purpose without a reasonable excuse.

According to court documents, Verma attended a gathering comprising eight others to celebrate the new year, while Singh is accused of attending a gathering made up of at least six others for the same purpose.

Both men, as well as another man linked to the incident, Kotra Venkata Sai Rohankrishna, told the court they intend to plead guilty.

Their individual ages were not stated in court documents.

Last month, Singh, Verma, Kotra and William Alexander Brooks-Potts, aged between 19 and 22, were hauled to court to face charges over failing to keep a 1m safe distance and not wearing a mask near Read Bridge in Clarke Quay at midnight on Jan 1.

Kotra was also accused of attending a gathering in a Spider-Man costume with three others, where he interacted with about 20 people.

All four men are scheduled to be back in court on March 8.

The incident, which was captured on video and uploaded on social media, is believed to have involved hundreds in a spontaneous countdown party in front of Riverside Point.

The multi-ministry task force tackling Covid-19 here said earlier this month that the gathering had led to blatant breaches of safe management rules, making it a potential superspreader event.

Videos show the rowdy crowd cheering, singing, celebrating and counting down to the new year.