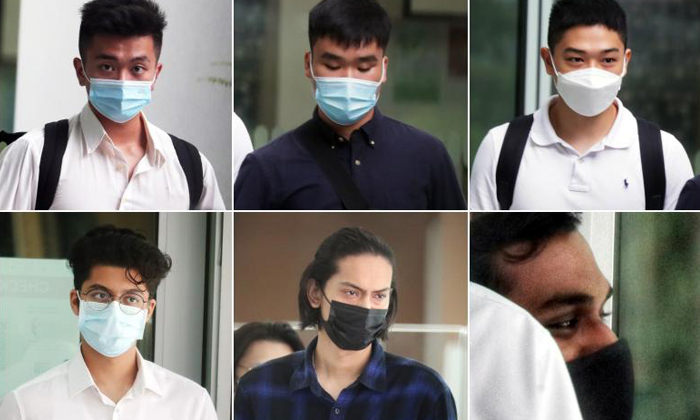 Low is accused of attending a gathering near Read Bridge outside Riverside Point for a common purpose at midnight on Dec 31 last year.

According to court documents, Low allegedly attended with three others a gathering of more than five people to record video interviews and take photographs. He is also accused of failing to keep a safe distance of 1m.

Loh and Goh are accused of not wearing a mask over their noses and mouths and of failing to keep a 1m safe distance at the walkway between Singapore River and Clarke Quay Central at 11.30pm on Dec 31 last year.

Farook, Sharath and Rao face similar charges of failing to keep a safe distance and wear a mask properly. However, they are said to have done so at midnight on Dec 31 near Read Bridge near Riverside Point.

The Urban Redevelopment Authority (URA) said on Monday that the six men are aged between 19 and 23.

Low and Farook intend to get a lawyer and are scheduled to be in court next on March 15.

Loh, Sharath, Goh and Rao told the court they intend to plead guilty. They are slated to be in court next on April 5.

The New Year's Eve gathering is believed to have involved hundreds in a countdown party in front of Riverside Point.

Kotra faced an additional charge for allegedly attending a gathering in a Spider-Man costume with three others, where he interacted with about 20 people.

Earlier this month, Verma and Singh were hauled to court to face an additional charge of attending the gathering for a common purpose without a reasonable excuse. Verma allegedly attended a gathering with eight others to celebrate the New Year, while Singh is accused of attending a gathering of at least six others.

URA said on Monday that 11 other people were issued composition fines of $1,000 each for breaching safe management rules, bringing the total number of people fined in relation to the incident to 15.