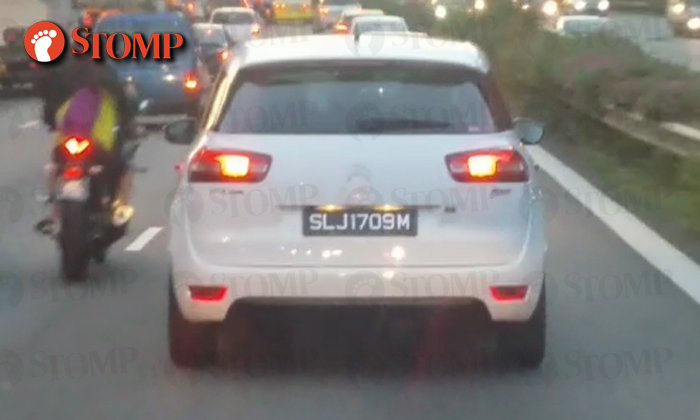 A Citroën driver refused to give way to an ambulance, which was carrying an elderly woman, despite the vehicle's blinkers, loud sirens and repeated honks.

The incident took place on the Pan-Island Expressway (PIE) along Stevens Road towards Tuas, on Friday (June 23) at around 7pm.

Stomper Christopher, who runs an ambulance company, shared with Stomp a video of what happened, after his staff recorded it and sent it to him.

According to him, the ambulance was carrying an elderly woman who had suffered a fall to the National University Hospital (NUH).

In the video, the driver did not appear to be making any effort to give way. Neither did he indicate having any difficulty in doing so.

Christopher said in a phone interview:

"This vehicle refused to give way to an ambulance on emergency even after the ambulance driver honked at him several times.

"Only after 1.5km did he decide to give way, causing lots of stress for family members and the driver to rush the patient to the hospital.

Christopher also told Stomp that despite the ambulance's blinkers indicating that it was an emergency and the need to reach the hospital as quickly as possible, in addition to multiple honks, the driver refused to give way.

"Even the police will give way to ambulances and we have encountered many considerate drivers who let us pass, which I appreciate.

"But this driver is very arrogant and stubborn.

"Ambulances are not for fun. Ambulance companies are just trying to do their jobs and not because we want to earn money.

"Do not hinder the jobs of ambulance drivers because it is very stressful, especially when we have to perform cardiopulmonary resuscitation (CPR) on the road."

Asked if he had made any reports to authorities about the incident, Christopher said:

"Making a report is very troublesome so I think Stomp is a better way to educate the people."