Circulated video of toddler falling from sixth-storey flat happened in China, not Sengkang 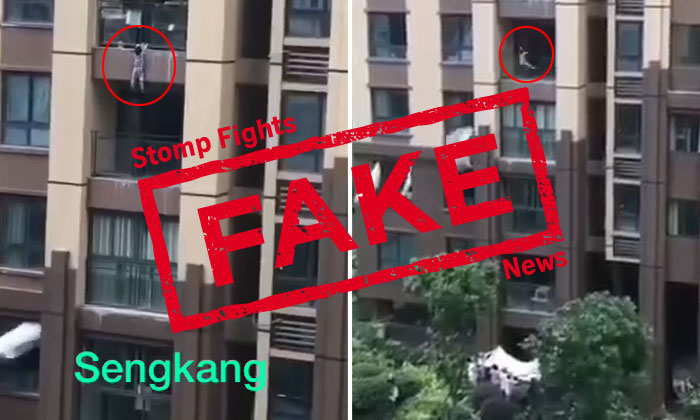 Footage of a toddler falling from a sixth-storey flat happened in China, not Sengkang.

Several Stompers alerted Stomp to the video circulating on social media with "Sengkang" captioned on it.

According to Chinese state media CCTV, the heart-stopping incident happened in Jiulongpo District in China's Chongqing city on July 29.

In the video, the toddler is seen dangling from a ledge on the sixth storey of a residential building.

He is seen struggling to get back onto the balcony while passers-by quickly spring to action and ready themselves below the toddler holding a sheet.

When the toddler eventually loses his grip and falls, he lands on the sheet held by the passers-by.

According to reports, the toddler did not suffer any serious injuries and is safe.

Local media revealed that he was at home alone after his grandmother had left the apartment to shop for groceries.