Circles.Life gives refund after Stomper finds out he was enrolled in unnecessary add-on service 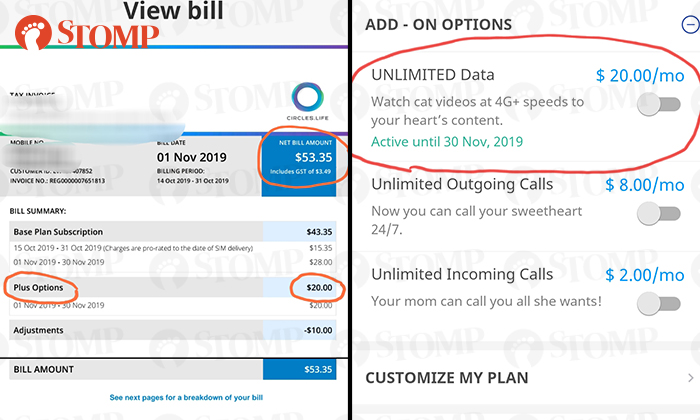 Circles.Life is performing a refund for a Stomper after he was automatically enrolled into an unnecessary add-on service that cost him an additional $20.

Stomper Nautical said: "I terminated my line with another telco and ported over to Circles.Life.

"Circles.Life has an $18 monthly subscription plan where I can get 20 gigabytes of data, so that got my attention and I subscribed to it on Oct 14.

"Everything was great but after about three weeks, I received my bill.

"I didn't select any of their Plus Options. The whole time I was subscribing and even before at the roadshows and websites, I never saw anything about this Plus Option.

"Turns out, I was automatically enrolled in this service that gives me unlimited data.

"Also, since my bill for the month of October should be pro-rated, I should be charged about $10 instead of $15.

"I sent an email to Circles.Life on Nov 7 but didn't get a reply until yesterday (Nov 11).

"They called me and apologised. They also said that they will waive the disputed charges.

"I think they should be more transparent when it comes to billing. I was automatically enrolled and I don't even need that much data.

"I only used about four gigabytes of data the previous month and my monthly subscription entitles me to 20, I don't need unlimited data at all.

"What if other people were to be in a similar situation.

"Some are not as tech-savvy or they may not have time to take note of these little details. Some people may find it troublesome to dispute these charges and would go ahead with paying for it.

"I think it's unethical and Circles.Life should be more transparent in how they bill their customers."

In response to a Stomp query, a Circles.Life spokesperson said: "We reached out to the customer via email and explained the situation.

"We are also performing a refund for the disputed charge."