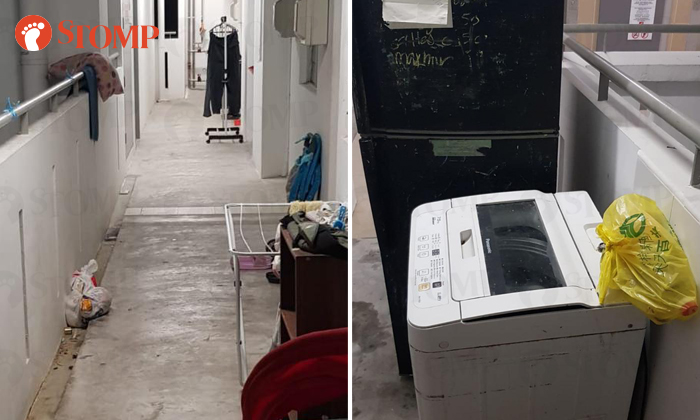 In response to a Stomp query, Chua Chu Kang Town Council (CCKTC) said on Friday (June 21) that they will be taking steps to improve the situation.

Imagine returning home and coming face to face with rubbish near your doorstep.

Ever since Stomper Anonymous moved into his new flat at Choa Chu Kang Avenue 7, he has been experiencing improper rubbish dumping from his neighbours.

He has lived in Choa Chu Kang since August 2018 and saw that rubbish has been discarded along the corridors, outside his neighbour’s flat.

He also noticed that the two rubbish chutes on the level sometimes get choked.

On May 8, Anonymous told Stomp he made a call to the Chua Chu Kang Town Council (CCKTC) but was instructed to send in an e-mail.

In the e-mail he sent, the Stomper shared photos of rubbish being disposed of improperly.

He requested for CCKTC to take action "against those who are being inconsiderate."

He received an automatic reply from CCKTC.

The e-mail mentioned that a “property officer will follow up."

A week later, posters were displayed around the neighbourhood. 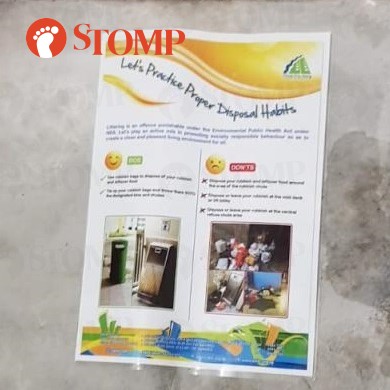 They outlined with photos of what was a “do” and what was considered a “don’t”.

The chutes were still getting choked, bags of rubbish could be found along the corridor, and home appliances such as a refrigerator and a washing machine were dumped there as well.

Items discarded would block almost the entire pathway towards the rubbish chutes.

Anonymous told Stomp: “This happens about three to four times every week.

"The rubbish chutes are choked and left open.

“Since rubbish isn’t disposed of properly, I’ve seen big cockroaches crawling out of the chutes.

“Pest infestation is getting worse.

"It's upsetting to see my block being so messy, please help us."

Stomp has reached out to the Town Council for more information.