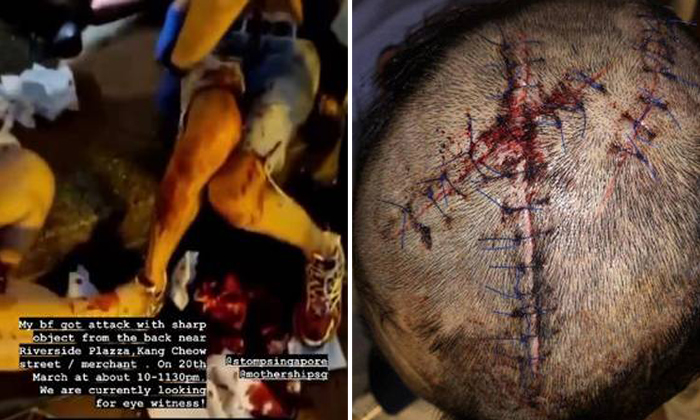 Four men linked to a random attack on a 30-year-old man in Clarke Quay were arrested and charged in court this week.

The victim, Mr Justin Chua Yong Jie, was struck on the back of his head allegedly with a Chivas glass bottle on March 20 as he was walking to a convenience store along Merchant Road after enjoying a meal with friends.

Mr Chua previously told The Straits Times that he had no clue as to who was behind the attack, which left him needing at least 20 stitches for gashes on his scalp.

On Saturday (April 2), Singaporean Dani Zulastri Mohamad Salim, 22, was charged with voluntarily causing grievous hurt likely to cause death by using a Chivas glass bottle to hit Mr Chua's head at around 10.45pm on March 20.

Court documents stated that Mr Chua, a financial adviser, suffered cuts on his scalp that were up to 10cm long.

Mr Chua's girlfriend, who gave her name only as Ms Low, told ST on Saturday that he was recovering well and was on medical leave for 17 days.

In an earlier interview, she said Mr Chua was celebrating a friend's birthday with four others at a restaurant near Clarke Quay when he left to go to a 7-Eleven outlet to buy a drink alone.

After the attack, he trudged back to his friends, who were shocked when they saw him all bloodied and called an ambulance, she added.

In a video posted on social media, paramedics can be seen tending to Mr Chua, who lay limp on the ground, his clothes and napkins around him soaked in blood.

"He told me he didn't see who attacked (him) as he was in shock. We have no clue who did this," Ms Low said then.

The maximum penalty for voluntarily causing grievous hurt by means of an instrument used as a weapon in a way that is likely to cause death is a jail term of up to 15 years, a fine and caning.

Dani is remanded and the group will return to court at a later date.