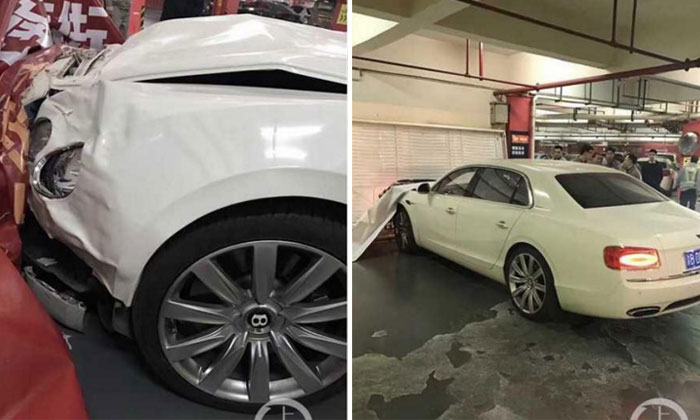 If there is anything important you will be learning from the following painful-to-watch video, it will be to NEVER forget to turn on the parking brakes of your car -- especially if it is parked on a slope.

And this lady learnt her lesson in the most tragic way possible.

We kid you not.

Filmed in a parking garage in the southwest city of Chiongqing, China, the viral video shows a lady stepping out of her luxury Bentley Flying Spur automobile as she attempts to pay for her ticket, reported The Coverage.

After the woman forgets to apply the parking brake, the high-end car starts rolling backwards rapidly.

The clip then shows the calamitous driver desperately trying her best to stop the vehicle from rolling down the slope towards the exit.

But of course, the lady is no match for the weight of the luxury car. Instead, the automobile gathers speed and hurtles towards the bottom of the ramp...smashing into a wall at the entrance of the building.

And as you can see from the images, the hood of the case has been completely destroyed.

According to Carbon.TV, this particular Bentley model is worth nearly 3 million yuan (S$620,092).

Bruh, this car is going to cost quite a bit to fix huh?

“Before getting out the car to swipe into the car park, the driver didn’t shift into first gear but left the car in neutral instead, and she also didn’t apply the handbrake. The car rolled forward and knocked into the wall,” said a local traffic officer, according to CCTV News via Carbon.TV.

Okay lets take a look at the bright side of things, at least no one is physically hurt.

The woman, however, has to pay for the costly repairs of her luxury car as well as for the wall that got damaged because of her mistake.

The video has since been viewed thousands of times since uploaded to Liveleak with viewers offering little sympathy.

One commenter wrote: “This would never happen to someone driving a Ford Escort.”

And the car jokes kept coming, with another saying: “Must have been a ‘Rolls’.”

One user sagely posted: “A fool and their money are easily parted.”

Remember guys, never forget to turn on your parking brake whenever you park on a slope.