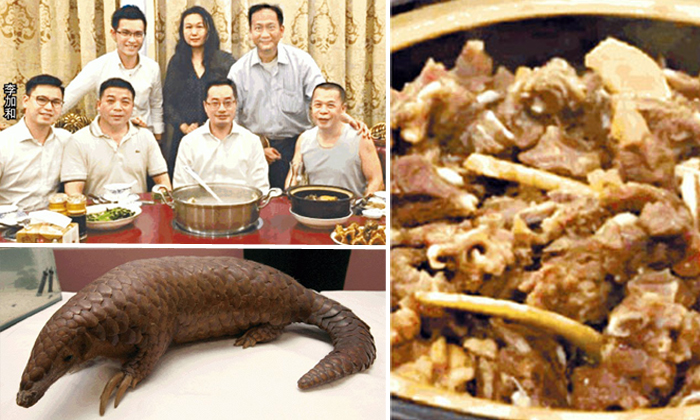 Animal lovers in China have been up in arms in recent days when news about a Hong Kong businessman enjoying pangolin meat at an official banquet in southern China went viral on social media.

The authorities in Guangxi Zhuang Autonomous Region had launched a probe into whether government officials had served the meat of the highly endangered animal at the dinner in 2015, reported Apple Daily.

It all started when the Hong Kong businessman Li Jiahe, reportedly the son of a clock tycoon, highlighted the "delicious" game-meat dish in a Weibo post under the name of 'Ah_cal' after the dinner then.

Although it has since been deleted, the news continued to be picked up by Weibo users and became one of the top trending topics on the social media site after netizens allegedly identified Li and the head of the Guangxi investment promotion agency in a photo of the dinner yesterday (Feb 6).

A copied post, which had been reproduced, shows photos of the feast, including a pot of cooked meat presumably to be pangolin.

The businessman had said in his post that one of the officials who organised the banquet was particularly fond of the scaled mammal, said Shanghaiist.

A Guangxi Department of Forestry employee told the Legal Evening News that China's State Forestry Administration had ordered an investigation.

The UN Convention on International Trade in Endangered Species passed a resolution in 2016 to prohibit any cross-border movement of the animals or their body parts for commercial purposes.

Apple Daily reported that as the law took effect in China on Jan 2, it has become illegal for anyone who kills or sells protected wild animals, with a jail penalty of up to 10 years. Eating such animals is also unlawful.

Pangolins are prized in traditional Chinese medicine as it is believed their scales are good for illnesses like cancer and asthma. Their meat is also considered to be a delicacy.

Related Stories
Who's the sicko who used scotch tape on bird in Potong Pasir?
Whoever did this must have a screw loose
illegal
pangolin
animals
animal cruelty
Chinese officials serve pangolin