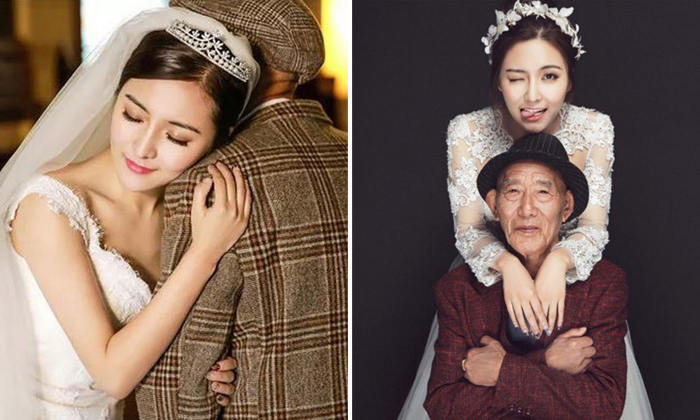 She has no intention of tying the knot soon, but a 25-year-old woman from Chengdu, China has set up a wedding shoot for her 87-year-old grandpa.

Fu Xuewei's photos of her dressed in a bridal gown next to her grandfather have gone viral, reported China Press.

Fu told local media that the idea struck her when her grandfather Fu Qiquan was admitted to hospital last September over a stroke. It was the second stroke in the last two years, reported Shanghaiist.

Fu was told that his condition may deteriorate further.

Fearing that he may not live to see her married, she decided to arrange for a wedding shoot with him.

The "pre-wedding" shoot, which was done in December last year, shows Fu in a long, white dress with her grandfather escorting her down the aisle in a dapper suit.

Just before the shoot, Fu also tattooed an image of her grandfather's face on her right arm.

Fu told Chengdu Business Daily that she was raised by her grandparents as her parents were busy working and rarely at home.

She said that her grandfather lived a frugal life but spoiled her at every opportunity.

She added that she wants to make sure that her future children will be able to remember his face.