Chef counselled, will be given warning letter over uncooked pork in woman's mala at Happy Hawkers 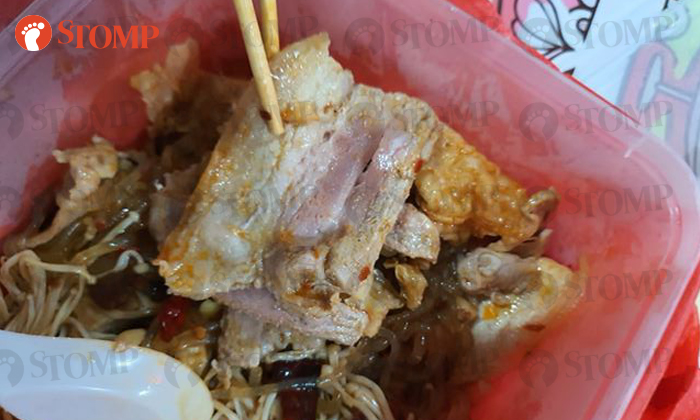 F&B operator Koufu has investigated an incident where a diner found a piece of seemingly uncooked pork in her mala meal at a coffee shop in Tiong Bahru on Friday evening (Nov 22), said a spokesman.

Stomper Casilda had visited the Happy Hawkers coffee shop at Block 18 Jalan Membina at around 8.30pm that day.

She said: "I ordered mala and when I bit into my first piece of pork, I realised that it had a weird texture so I spat it out. That's when I realised that the pork was uncooked.

"I asked the staff for a refund but they told me they were just workers and could not do a refund.

"They also said the chef was new and therefore might be unfamiliar with things. If the chef can't cook then why is he even a chef in the first place?"

Casilda subsequently wrote in to Koufu, parent company of the Happy Hawkers brand, as well as the relevant authorities about the matter.

"I'm never going back to the stall," she added.

In response to a Stomp query, a Koufu spokesman said it has since responded to the diner about the incident after receiving an email from her.

"Food safety and customer service are of utmost importance to us," a spokesman told Stomp.

"We have conducted an investigation after receiving her email on Nov 22, and understood that a piece of pork was seemingly uncooked.

"We have interviewed the staff who had attended to her, and re-briefed her on service excellence and approaching our outlet manager for assistance should she encounter such incidents in future.

According to the spokesman, a hygiene manager also conducted a check at the stall to ensure that there was no lapse in the food safety and hygiene processes.

"We also counselled the cook on the importance of food safety and will be serving him a warning letter for this incident," added the spokesman.

"The cooking timing for such dishes was also lengthened to ensure that all ingredients are cooked thoroughly.

"We would like to assure our customers that we take every feedback seriously. Customers can contact us at enquiry@koufu.com.sg to send in their enquiries or feedback."