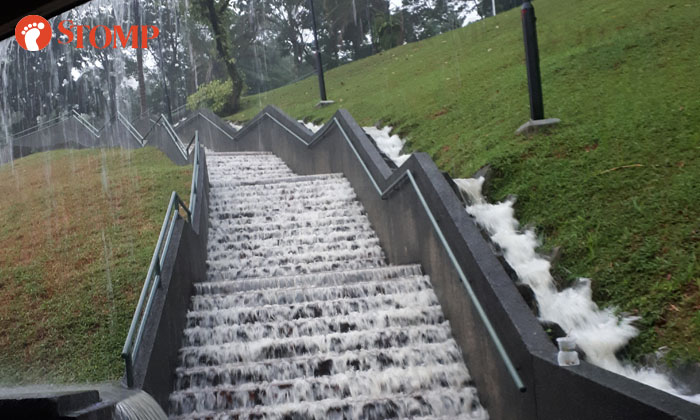 Water was spotted cascading down a staircase at Ang Mo Kio Town Garden East, next to Ang Mo Kio MRT Station, at about 5.48pm on Wednesday (Sep 19).

Stomper Jack was on his way home when he was caught in the downpour.

In a photo taken by Jack, the staircase is seen flooded with water that has a current so strong it appeared white.

Another stream of water can also be seen next to the stairs.

He said: "There is a heavy rain today, I was going home when I saw this 'staircase waterfall'."

Although he didn't intend to use the staircase, he added that it was inconvenient for those who wanted to.

"I felt annoyed because it caused an inconvenience, it's difficult to use the stairs," he said.

The Public Utilities Board had also issued announcements regarding flash floods around various parts of Ang Mo Kio at 5.48pm yesterday, along with a reminder to drive carefully.

Stomper Sha was in the vicinity Yio Chu Kang at 6.44pm when he saw a flash flood as well.

In a video taken by him, vehicles are seen wading through the water.

Driving with care proved to be difficult in this weather.

At about 5.30pm yesterday (Sep 19), a Honda car got stuck when it was driving along Yio Chu Kang Road towards Ang Mo Kio Avenue 5, with water seen reaching half of the car tyres' height.

Related Stories
'Waterfall' at Jelapang Rd carpark after downpour -- and it's not the first time
Flash flood at Dunearn Road near King Albert Park MRT Station
Even Red Rhino has to wade through water after heavy rain at Geylang Lorong 23
More About:
flood
flash flood
raining
weather