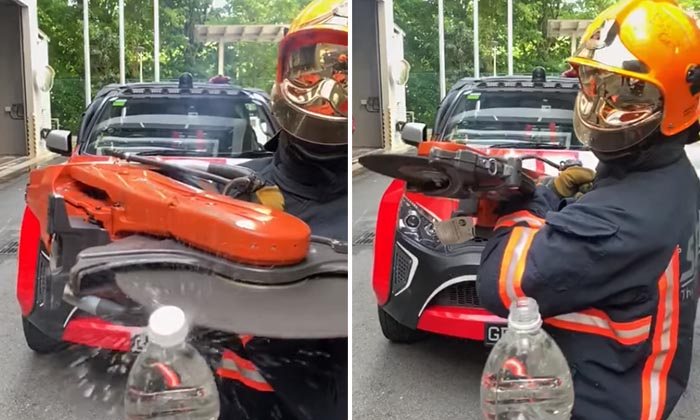 If you have not heard of the latest Bottle Cap challenge, then it is time to keep up.

The viral challenge that has been making its rounds on various social media platforms is mainly about unscrewing the cap of a bottle with a roundhouse kick while making sure that the bottle does not fall over.

The Singapore Civil Defence Force (SCDF) has hopped on the bandwagon.

They published a video on July 5 (Friday) showing a uniformed personnel holding a circular power saw.

The video shows the personnel using the power saw and successfully removing the bottle cap with the bottle left intact.

Different celebrities have also tried it out, each taking on a unique spin.

Hong Kong actor, Donnie Yen, who is known for his roles in many action movies like Ip Man, successfully completed the challenge blindfolded.

English actor and film producer, Jason Statham, also jumped in and filmed a slow-motion video of him doing a roundhouse kick to remove a bottle cap.

#bottlecapchallenge #challengeaccepted @erlsn.acr This thing landed on my head from @johnmayer but will quickly go to a couple of fellas we’ve seen do push ups badly. All yours @guyritchie and @jmoontasri

Singer-songwriter and actress, Mariah Carey, went a different route. Instead of a roundhouse kick, she tapped on her singing abilities to spin the bottle cap off.

While these are really cool methods to unscrew a bottle cap, I think I will just stick to my hands.

Related Stories
Vlogger tries to eat live octopus -- but gets it stuck on her face instead
Stomper takes IQ test on FB -- only to receive invoice and repeated requests for payment
Feeling lazy? Netizens use chest as drink holder in latest Internet trend
More About:
challenge
viral
trend
scdf