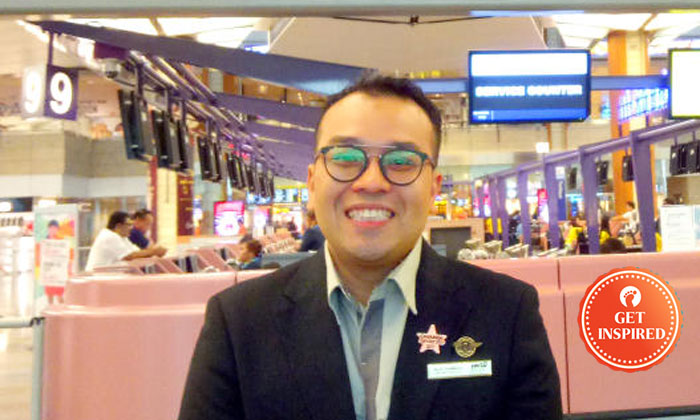 As a Certis Cisco aviation security supervisor, Mr Nur Hamzah Rahmat and his team have come across all kinds of things that are left behind, from bottles of perfumes to a bag full of new clothes.

But on May 24, he came across something different - a Louis Vuitton pouch containing more than $30,000.

The pouch had been left on a trolley at the boarding area at Terminal 2 of Changi Airport.

Said Mr Hamzah: "When I initially saw the red notes, I thought they were Indonesian rupiah, but later I realised it was actually $1,000 dollar notes in Singapore currency."

Without hesitation, the 39-year-old handed it to the information counter. Within three days, the black pouch, which also contained a name card and a mobile phone, was returned to its owner.

Mr Hamzah used to work in the logistics industry and went on to Certis Cisco eight years ago. The assistant shift executive at Terminal 2 supervises 140 officers.

He said it was his late grandmother who instilled the value of honesty in him.

"She would always tell me that even as a cleaner or sweeper, we should always work with integrity. She used to say that we should never take what is not ours," he said.

Mr Hamzah, who has been married for 15 years, said he has tried to pass on these values to his daughter.

He said: "I advise her to report anything she finds to her teacher, and I lead by example, sharing with her some of the things I do at work."

In 2014, he won a silver award for service of the year at the Annual Airport Celebration, for trying to resuscitate an elderly passenger. Unfortunately, the woman died.

Senior vice-president and head of Certis Cisco aviation security, Mr Benny Lim, said: "Hamzah displays qualities of integrity and professionalism, the core values of Certis Cisco. He performs his duties with utmost dedication, and goes the extra mile to deliver top notch security service. We are proud to have him on the team."

The company may nominate Mr Hamzah for internal awards such as the commander's award and pinnacle award this year.

Related Stories
Kudos to guy who waited over an hour to apologise to driver and arrange for repair after scratching car door
China bank accidentally transfers 1.2 billion yuan to customer -- and he returns it all
Homeless Thai man returns wallet with $780 in it -- and gets rewarded with a job and home
More About:
kudos
get inspired
inspiring
honest
honesty
money
return
Changi airport
security