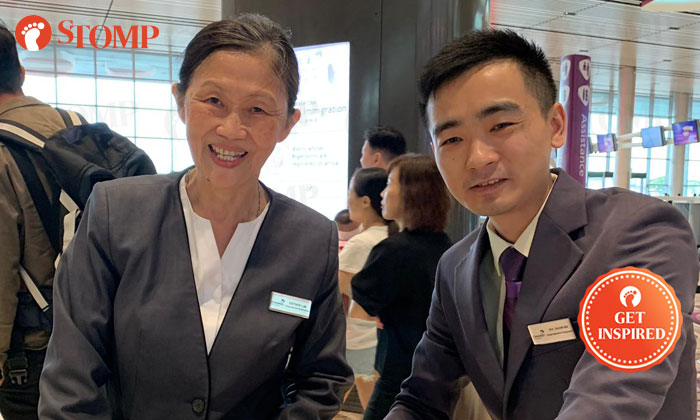 Stomper Nina panicked when she realised she was at the wrong Changi Airport terminal to catch her flight to Kuching, Malaysia on Apr 20.

With two heavy bags and a two-year-old toddler, Nina did not know how she would get from Terminal 1 to Terminal 4 in time for check-in.

Thankfully, two Changi Airport Ambassadors came to her rescue to ensure she made her flight.

"I want to express my gratitude to Esther Lim and Calvin Yao who went the extra mile to help me and my two-year-old," she said.

"I was supposed to travel to Terminal 4 but told my cab driver to go to Terminal 1 due to my foolishness and not reading my itinerary beforehand.

"I reached Terminal 1 at 4.45pm, looking for my flight that was scheduled to depart at 6.10pm.

"These two ambassadors approached me and asked me which flight I was looking for.

"When I told them my flight number and departure time, they told me that my flight would be departing from Terminal 4.

"I was shocked and started panicking because I had not been to Terminal 4 before and didn't know how to get there."

At that point, the ambassadors informed Nina the check-in counter would be closing in 20 minutes and that she needed to get there as soon as possible.

"I started to get worried because I was carrying two heavy bags and my toddler can't walk very fast.

"How was I going to get there on time?"

"Seeing my worries, the two kind souls offered to help me with my bags and we beat the rush hour by taking the Skytrain to Terminal 2 before taking a shuttle bus to Terminal 4."

Nina managed to arrive at the check-in counter a few minutes before it closed.

"I just want to say thank you very much to Esther Lim and Calvin Yao for their help and this great experience at Changi Airport," she said.

In response to a Stomp media query, a spokesman from Changi Airport Group said:

"We are pleased that our Changi Ambassadors, Yao Fan (Calvin) and Esther Lim, were able to be of assistance and appreciate the passenger taking the time to give the very positive feedback about their experience.

"Calvin and Esther displayed the Changi Service DNA that we seek to inculcate in all who work at the airport.

"This is to provide a stress-free, personalised and positively surprising experience for all our passengers."