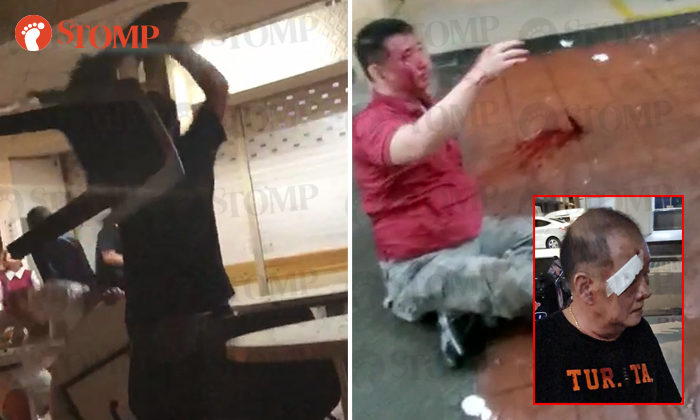 Four men and a woman, aged between 52 and 65, have been arrested over a fight that broke out at a coffee shop along Hougang Avenue 8 on Sunday night (Aug 9).

Stomper Don witnessed the incident that occurred at Block 631 Hougang Avenue 8 at 10.33pm and took videos.

Don told Stomp: "I was having a drink at the coffee shop when the fight happened, but I'm not sure what started it.

"There were injured men in black and red who wouldn't let the matter rest as you can see in one of the videos.

"The police came around 10 minutes later and cordoned off the area in the coffee shop."

In videos that Don sent to Stomp, men can be seen exchanging blows. Chairs were also thrown during the altercation and the sound of glass breaking can be heard.

Another video shows a man in a red shirt sitting on the ground with his face bloodied.

Don also shared a picture of another man with a bandage on his face.

Following queries by Stomp, the police said they arrested five people on Tuesday (Aug 11) for their suspected involvement in a case of affray.

Officers from Ang Mo Kio Police Division had established the identities of the suspects through ground enquires and follow-up investigations.

"Preliminary investigations revealed that two groups of patrons had a prior dispute while at the coffee shop," said the police in a statement on Thursday (Aug 13).

The offence of affray carries a jail term of up to one year and/or a fine of up to $5,000.