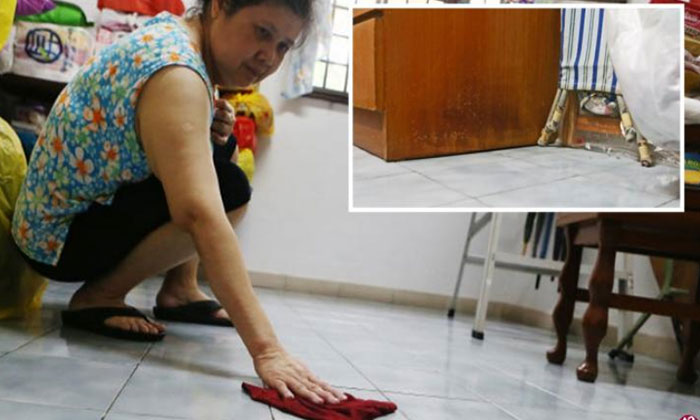 A resident staying at Block 19 Chai Chee Road alleges that her neighbours downstairs have been directing cold air from their air-conditioners to the ceiling, causing her floor to become cold and moist perpetually.

The resident lamented that she now has to wipe her floor several times a day. Furthermore, furniture pieces in her home have started becoming mouldy as well.

Ms Yang Qingxiu, 53, who stays in the flat with her 92-year-old mother, told Lianhe Wanbao that everything had been fine until the neighbours moved into the unit directly below theirs about two years ago.

Ms Yang said that the new neighbours comprised of a family of five and their domestic helper. After they moved in, she observed that her neighbours' air-conditioners appeared to be constantly turned on at full blast.

“I think they must have turned the air-conditioners to the lowest temperature setting and direct the cold air at the ceiling. I stay in the unit directly above theirs, so my floor is affected.”

Ms Yang said that for the past two years, her home has turned into an “ice cellar” and it would be cold enough for water to condense on her floor tiles.

Due to the condensation phenomenon, the tiles at Ms Yang’s home are constantly wet.

To prove her point, Ms Yang brought reporters to inspect her furniture.

True enough, reporters observed a patch of mould growing by the side of the wardrobe. The legs of MsYang's dining table, as well as some bodybuilding equipment, were also rusty.

“These items have been in use for 30 to 40 years, and they remained functional. However, ever since the neighbours moved in, they started spoiling, one by one.”

Ms Yang told reporters that she had to toss a mattress which she regularly slept on as it became mouldy.

Other than the damage to the furniture, Ms Yang said that her health has also been affected. Ms Yang, who never had a habit of wearing slippers in her house, said that she frequently feels her bones aching, and even suffers from cramps occasionally due to the cold.

She has started wearing slippers to avoid direct contact with the frigid tiles.

“Sometimes I even have to wear socks or put on an additional three layers of clothing just to keep warm. This is unbearable!”

Reporters who used the tap at Ms Yang’s house, also found the tap water cool, even a little cold.

“I have stayed here for over 30 years but I never expected things to turn out like this. The floor is constantly wet. Who is going to be responsible if my mother slips and falls?

“I have no income. How can I afford to replace the furniture?”