CGH responds to woman's claims that staff were "unprofessional, unsympathetic and insensitive" when treating her late grandma 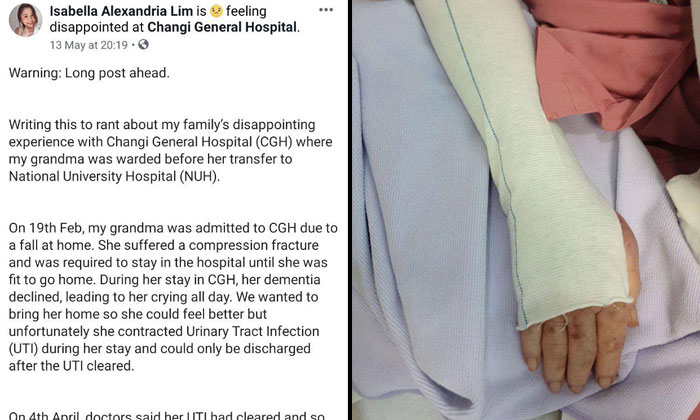 Changi General Hospital (CGH) has responded to Stomp regarding a post on social media by a woman who criticised the care her late grandmother received during her stay at the hospital.

Facebook user Ms Isabella Lim took to Facebook on Monday (May 13) to "rant" about the disappointment her family felt during her grandmother's final days at CGH before she was transferred to National University Hospital (NUH).

Her grandmother was first admitted to CGH on Feb 19 after having a fall at home and suffering a compression fracture.

However, while she was hospitalised, Ms Lim said that her grandmother's dementia took a turn and she would cry all day.

"We wanted to bring her home so she could feel better but unfortunately, she contracted a urinary tract infection (UTI) during her stay and could only be discharged after the UTI cleared," she wrote.

Doctors cleared her to be discharged on Apr 4 but she continued to cry constantly and had trouble passing urine which had blood in it so she was admitted again to CGH on Apr 7.

She was later transferred to a ward for dementia patients on Apr 18 to receive better care for her condition.

However, Ms Lim said this is where "things went downhill".

On Apr 25, she said the family were told her grandmother would only have between a few days to a week to live.

"Until now I can't comprehend how her condition declined so quickly from a fall to a UTI to this," she said.

Ms Lim wrote that on Apr 26, an on-duty nurse told her family to stay overnight as her grandmother's vitals were going down and that she may die that night.

However, even though she could not be fed with a feeding tube or put on an intravenous therapy (IV) drip, her grandmother pulled through for nine more days without food and water.

Ms Lim stopped going to work to look after her grandmother from morning to night.

From Apr 26 to May 3, Ms Lim said she witnessed the staff's "unprofessional, unsympathetic and insensitive" attitude towards her grandmother.

She said the doctors and nurses failed to communicate effectively with her family after they administered morphine to her grandmother without telling them, causing her to be unresponsive.

She said that a heated blanket that was used to keep her grandmother warm was also removed without the family's permission.

When asked about it, a nurse allegedly replied, "Put every day got cost you know?"

Later that day, she approached a nurse regarding her grandmother's rapid heartbeat who allegedly sighed and mumbled something to her colleague while remaining seated.

The nurse's colleague showed up after 15 minutes and when asked again about Ms Lim's grandmother's heart rate, said: "Depends on God."

Ms Lim also claimed that her family requested for blood tests several times to check if her grandmother's condition was stabilising but doctors allegedly refused to do it and claimed "the results will be the same".

She added "the nurses were not present" at the nurse's station and ward most of the time.

As a result, the family often found themselves waiting for someone to change her grandmother's diapers or change her position to avoid bedsores.

Having had enough, the family transferred Ms Lim's grandmother to NUH even though doctors strongly advised against it.

Ms Lim said that when NUH doctors requested to speak to a CGH doctor to facilitate the transfer, the primary care doctor "refused" to speak to his counterpart.

In the end, they got a private ambulance to transfer her grandmother to NUH where she described the service as a "big contrast" from that received at CGH.

She said nurses would check on her grandmother every one to three hours and applied creams and tended to her bed sores, which allegedly never happened at CGH.

"We are saddened by the news of the patient’s passing and empathise with the family’s anguish.

"Following the family’s feedback, CGH Medical Board conducted a thorough review of the case.

"Appropriate medical care was given during her stay at CGH.

"However, there were communication gaps which could have been prevented.

"While the care team provided regular updates to the family member designated as main caregiver, we could have done better in engaging the different family members and helping them understand the diagnostic and therapeutic interventions by the care team.

"During the patient’s stay at CGH, she did not respond to the antibiotics treatment due to pre-existing conditions and advanced age, and required invasive procedures for further investigation.

"The care team explained the treatment options and risks involved to the family and they agreed on conservative treatment that focused on alleviating symptoms that caused discomfort to the patient.

"The patient was assessed to be at risk of developing pressure sores.

"We promptly took preventive measures which included close monitoring of her skin condition, placing her on a pressure-relieving air mattress and turning her at regular intervals to prevent pressure sores from developing while respecting the request from family members to minimise disrupting her rest.

"During a subsequent family meeting, the family asked about the process to seek a second opinion at another hospital.

"The high risks associated with a hospital transfer due to the patient’s condition, was highlighted.

"The family decided to proceed with the transfer and the care team facilitated with a doctor’s letter to NUH Emergency Department to enable continuity of care.

"We are sorry for the anxiety caused to the family.

"Owing to patient confidentiality, it would be more appropriate for us to meet with the family to address their concerns, and provide full details of the case.

"We will do our best to learn from this incident and improve our care delivery processes."

Related Stories
NUH responds to FB post alleging that staff ignored pregnant woman who was in pain
Cancer patient traumatised after NUH doctor 'forgets' to remove gauze from her wound
Woman sent to wrong ward after hospital staff reportedly mistake her for another patient
More About:
hospital
complaint
bad service