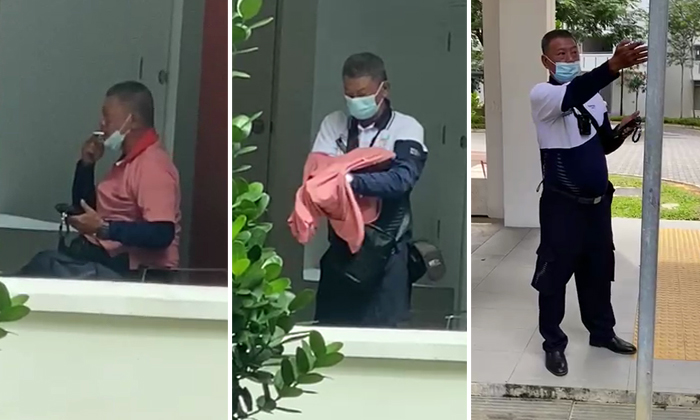 An enforcement officer who was caught on camera smoking at a void deck and throwing the cigarette butt on the ground has been suspended from all duties and given a warning letter, said security firm Certis.

Videos of the incident that occurred at Woodlands Avenue 6 on Saturday (Nov 21) were posted on Facebook, which several readers alerted Stomp to.

In one video, a man in a polo shirt can be seen smoking while seated at the void deck. He subsequently tosses the cigarette butt on the grass patch and pulls up his mask.

The person recording the video can be heard saying: "Sitting under the void deck and smoking... and littering."

POWER & FAMOUS PARKING OFFICER. ENFORCING THE LAW. BREAKING THE LAW. WHO CAN TAKE ACTION TO THIS?

The man is then seen removing his polo shirt and folding it into his bag, thus revealing his Certis attire.

Another video shows the same Certis officer in a dispute with two deliverymen after he had apparently taken down their details for parking in the loading bay.

The deliverymen can be heard trying to explain that they had parked in the loading bay for only a few minutes as they had to go upstairs to make deliveries.

They also said they had paid to pass through the carpark gantry.

"Alamak, why like this ah? Correct or not? Everybody now very difficult, you know, earn the hard-earned money, you know," said one deliveryman.

Another deliveryman also said: "We come in is not free, you know, we come in still paying the gantry, you know."

However, the first deliveryman refuted this and questioned why the officer had taken down his licence plate number.

It is unclear which of the videos was recorded first.

In response to a Stomp query, Certis said it was disappointed to learn of the incident.

A spokesman added: "Our enforcement officer was filmed smoking and improperly disposing the cigarette butt at Woodlands Avenue 6.

"After our internal investigation, we spoke to the officer and issued him with a Letter of Warning. He has also been suspended from all duties."

The incident has been reported to relevant authorities for further action.

"Certis expects the highest discipline standards from our officers, and they are required to fully comply with these standards and observe the law at all times," said the spokesman.

Related Stories
Seen a Certis officer without mask on? This might be why
Aetos investigating after officer seen without mask when responding to SLE accident
TP officer being investigated for not wearing mask properly while on duty: Police
More About:
dispute
smoking
littering
Certis
facebook
viral
delivery