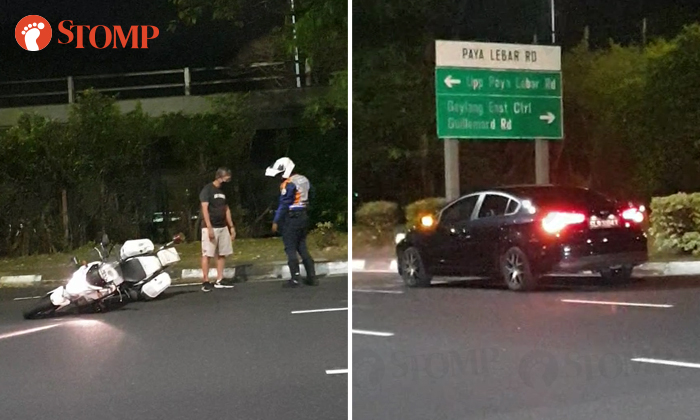 A 27-year-old Certis officer was taken to hospital after an accident involving his motorcycle and a car along a slip road off the Pan-Island Expressway (PIE) on Sunday night (Feb 28).

Responding to a Stomp query, the police said they were alerted to the accident along the PIE towards Changi Airport, at the slip road into the junction of Paya Lebar Road and Circuit Road, at 9.07pm.

Stomper Benny shared a video of the accident scene showing the Certis officer with his motorcycle stopped by the roadside.

Benny said: "The Certis officer was exiting from the PIE when a driver exited from Circuit Road and cut into four lanes, hitting the officer."

The 27-year-old motorcyclist was conscious when conveyed to the hospital and investigations are ongoing, police added.

A Certis spokesman told Stomp it is aware of the accident involving a Certis Auxiliary Police outrider and a car.

"The officer sustained shoulder injuries and was immediately sent to the hospital. He was discharged the next day and is on seven days' medical leave," the spokesman said.

"We will continue to monitor his recovery and provide full assistance to police investigations."