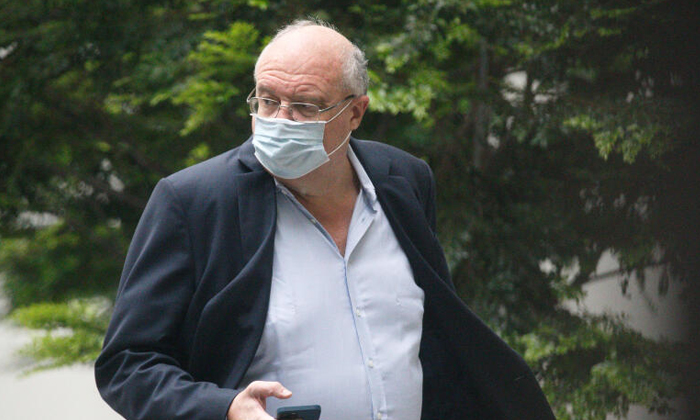 The chief executive of a private investment holding company who opened a passenger door of the taxi he was in, causing a near collision, and assaulted the cabby after being asked to shut the door, was found guilty on Thursday (April 7).

The assault left the taxi driver with a dislocated shoulder.

Briton Paul John Murphy was on his way home in a taxi after a drinking session on March 2, 2018, when the vehicle stopped at a red light.

Even though he had not reached his destination, he opened the left rear passenger door and this resulted in a passing vehicle having to swerve out of the way.

Murphy, now 60, who is a director at PWS Holdings, complied but later assaulted the cabby while he was driving.

After a trial, District Judge Ong Chin Rhu found Murphy guilty of one count each of voluntarily causing hurt and performing a negligent act that could endanger the personal safety of others.

In his submissions, Deputy Public Prosecutor Lee Zu Zhao said that the victim suffered the dislocation "as a result of boorish behaviour exhibited by his intoxicated passenger", who had opened the door "into moving traffic when he mistakenly assumed that they had arrived at his destination".

The court heard that Murphy had earlier gone to the Singapore Recreation Club in Connaught Drive near the Padang for a drinking session on March 2, 2018. Mr Elgin Lee picked him up at the club at around 10pm that day.

The cabby was driving towards Murphy's home when he stopped his vehicle at a red light at the exit of the Central Expressway towards Outram Road.

DPP Lee said that the taxi was stationary when Murphy opened the passenger door.

The cabby shouted at him thrice to close the door and he complied, the court heard.

The DPP added: "Shortly after that, the victim felt the accused hitting his left upper arm twice. Following that, while making a right turn into Outram Road, the victim was checking his left wing mirror when he noticed a shadow coming towards him and raised his left arm to block it.

"It turned out that that was the accused trying to hit him, and after it impacted the victim's left lower arm, the victim suffered a left shoulder dislocation."

Feeling pain, the court heard that Mr Elgin Lee stopped the taxi, alighted and told Murphy to get out of the vehicle.

He then told Murphy that he would not be collecting the fare, said DPP Lee.

The prosecutor told Judge Ong that Murphy alighted and the cabby drove away, only to stop at nearby Eng Hoon Street as the pain was "unbearable".

Two friends later took him to Mount Alvernia Hospital where he was diagnosed with a "left shoulder traumatic dislocation". He was granted hospitalisation leave from March 3 to 20.

Murphy is represented by lawyers Pratap Kishan and Nirmal Singh.

During the trial, Murphy had said that after closing the door, he apologised to Mr Elgin Lee who "continued to shout vulgarities at him".

The DPP said: "(According to the defence), the victim also half-turned towards him, raised both hands, which were balled into fists, and came towards him with his arms swinging.

"The accused then felt threatened, stretched out his right arm to restrain the victim, and his palm connected with the victim's left upper arm."

According to the defence, Mr Elgin Lee went backwards into his seat and told Murphy to get out of the taxi. The Briton then complied, the court heard.

A doctor, however, told the court during an earlier proceeding that the scenario described by the cabby would be the most likely means by which the dislocation could occur.

DPP Lee told the court in his submissions: "It is evident that the accused must have, at minimum, used sufficient force on the victim's arm to cause it to dislocate."

Murphy is expected to be sentenced on May 24.

For voluntarily causing hurt, an offender can be jailed for up to two years and fined up to $5,000.

Related Stories
Delivery rider arrested after allegedly punching taxi driver who honked at him
Ex-CEO of Prive Group who assaulted boy, 13, gets 12 months of mandatory treatment
Unmasked man who abused cabby while drunk has resolved to give up alcohol forever
More About:
assault
cabby
taxi
court