Cellulose casing that woman found in sausage is used in production, safe to eat: Sheng Siong 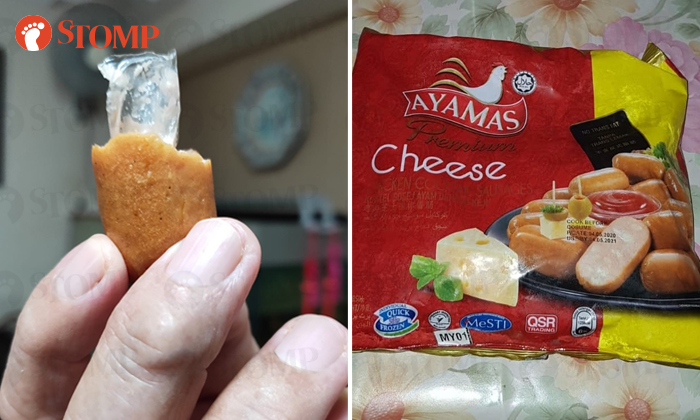 Supermarket chain Sheng Siong has responded to feedback from a customer who found a foreign object in her cocktail sausage following investigations by the product's supplier.

B and her family were having their dinner on July 25 when she bit into a plastic sheet in one of the sausages.

The Stomper recounted: "I was enjoying my dinner and tried to bite half of the sausage when I felt something unusual.

"I tried to pull and spit it out, and realised that there was a plastic sheet stuck in the sausage."

B, who sent photos of the incident, said that only one piece of sausage was affected but her family decided to throw the entire packet away.

In response to a Stomp query, a spokesman for Sheng Siong said: "We appreciate that the customer has brought this incident to our attention and we apologise for it.

"When we were informed of the incident, we immediately recalled this batch of Ayamas Cocktail Sausage with the expiry date May 4, 2021, from all our stores and notified the supplier.

"Based on the supplier’s investigations, the foreign object is the cellulose casing used in production. This casing is used to form the shape of the sausages and is safe for use in food."

The spokesman also said that Sheng Siong would like to offer a refund or exchange to the affected customer.