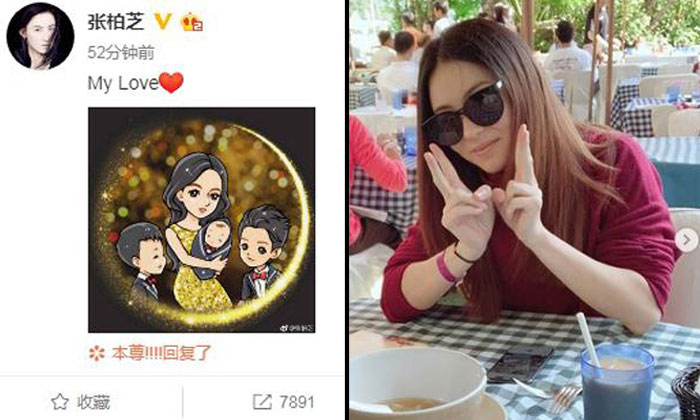 It's confirmed -- Hong Kong actress Cecilia Cheung is indeed the mother of three, and her youngest, a baby boy, has just turned a month old.

In a Weibo message addressed to fans and the media on Monday morning (Dec 17), her management company shared that Cheung had given birth to a baby boy in November and has just celebrated his full month.

Referring to her newborn as "the little prince," the statement added that Cheung has always prioritised her children and family, and will strive to give them the best in life. Cheung has two sons - Lucas, 11, and Quintus, 8, from her marriage to Nicholas Tse. The couple separated in 2011.

The 38-year-old beauty also posted a photo her Weibo account several hours later, which showed a caricature of herself carrying a baby, while being surrounded by two other boys. She captioned the image, "My Love". Unconfirmed reports in November said that Cheung had given birth to a baby boy in Hong Kong.

Since then, the identity of the father of the boy has been the subject of much media scrutiny. Among the possible 'candidates' included a man described to be a wealthy 65-year-old Singaporean businessman.

Cheung was also spotted out and about in a friend's Instagram post on Dec 2, leading people to wonder if she'd really given birth.

Well, we guess the mystery's solved.