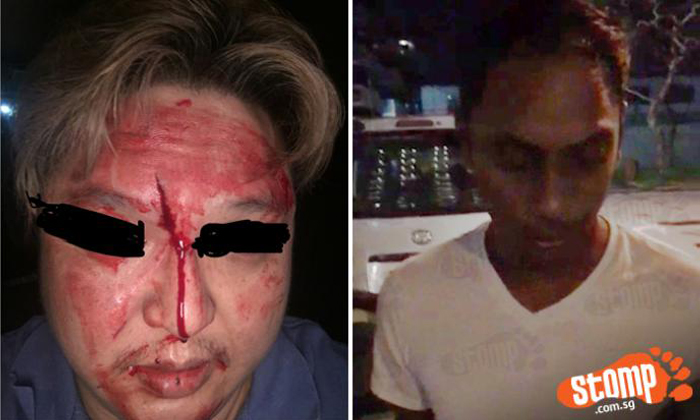 A man was caught on camera throwing repeated punches at an Uber driver who did not want to pick him up and cancelled the trip for safety reasons.

Stomper Kevin contributed videos showing the violent altercation as well as a photo of the driver's bloodied and bruised face.

He said that someone else had made the Uber booking on behalf of the man and added:

"The drunkard guy became aggressive and scolded vulgarities to the Uber driver.

"The driver decided to cancel the trip for his own safety, but the man refused to go out of the car and even prevented the car from moving.

"When the driver tried to remove the man's hand, he suddenly kicked and punched the Uber driver."

In the videos, the driver can be seen telling the passenger that he was being very "rude" and "I don't want to take you" because "you jeopardise my life".

The man then exited the vehicle, but refused to leave despite multiple requests from the driver to "please go".

Suddenly, he threw a punch at the driver and started attacking him.

A little girl, who was at the scene as seen in the clips and presumably the passenger's daughter, can be heard calling, "Daddy" repeatedly.

According to Kevin, the police and an ambulance was called.

The Stomper added, "Hopefully the guy will be brought to justice. Have also called Uber and hopefully the rental fee can be waived off."

In response to media queries, a Police spokesperson told Stomp that they were alerted to a case of voluntarily causing hurt at about 12.55am.

Both parties were advised on their legal recourse.

In response to Stomp's query on the issue, Uber has also issued a formal response:

"This behaviour is unacceptable as per Uber community guidelines.

"We're engaging with the driver partner involved and have taken appropriate action.