Man allegedly shouts at family whom he chased out of car, drives up kerb towards them and even 'pins' wife against wall 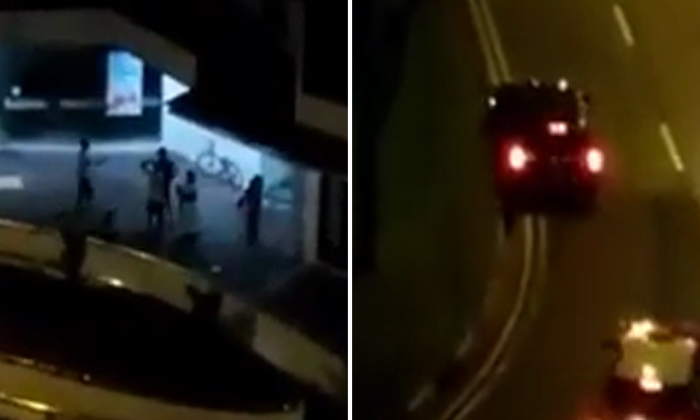 A man was allegedly caught behaving aggressively towards his family along Pioneer Road North yesterday night (Nov 12) at around 11.30pm.

A video of the incident, credited to Mdm Noor, was posted online by the SG HardTruth Community Facebook page.

According to a caption accompanying the clip and Mdm Noor's account of what happened, the man had apparently been shouting at two women and three kids.

Mdm Noor said: "Judging by how they were just standing there unsure of what to do and that the car front passenger's door was open, I had already suspected that they were passengers in the car and was chased out by the driver.

"The driver then went back into the car and honked non-stop to nothing. After awhile, without closing the front passenger's door, he reversed at least twice (going against the flow of traffic) to follow the ladies and kids who were walking away.

"He then drove up the kerb and targeted towards them. One of the older kids was already right in front of the headlights."

After the man left, his family apparently approached two teenagers to ask for their help in calling a taxi.

However, the man was said to have returned and scolded the two teenagers, as well as "asked [them] to mind their own business as it's his family issues."

Mdm Noor said that at this point, she and her husband then went downstairs to see what was going on.

"We moved a little further from them as the husband was glancing at us and since I'm pregnant, we did not want to get into unnecessary trouble.

"By then all the witnesses had gathered with us and a few had called the police. By the time the police arrived, the whole family had left. We didn't know if any domestic violence was involved while we were not around to watch."

Mdm Noor also alleged that the man had been "recklessly driving; reversing with the doors open, driving against traffic, driving on pedestrian walkway, making a U-turn at non-designated U-turn spots, beating the red light and has a temper."

See her full post and video below or in the gallery.

Related Stories
What's wrong with her? Woman hits elderly man with plastic scoop while bathing him
What on earth is this person doing? Baby gets roughly flipped on toilet floor and held under shower water
Imagine if someone did this to your mum: Elderly woman viciously slapped and beaten by man at old folks' home in Malaysia
Maid hits, elbows and shakes employer's sickly 96-year-old mum who helplessly tries to defend herself in shocking video
assault
dispute
argument
man intimidates family
abuse