Elderly woman pockets $10 in change, then allegedly pretends to have dropped it near cash register 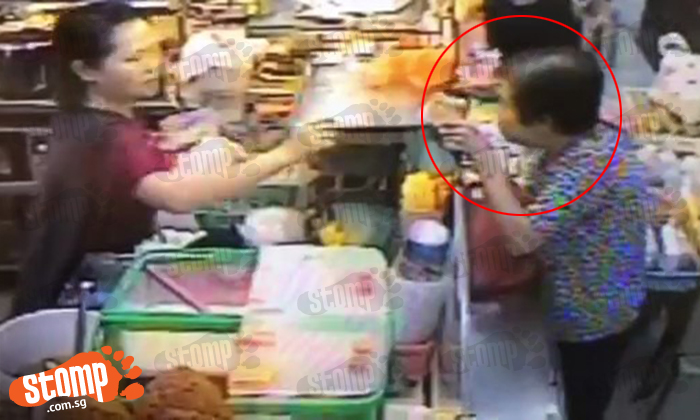 Stomper Christine wished to alert other shopkeepers about an elderly woman who allegedly pockets the change given to her, then pretends to have dropped the note.

The woman is believed to do so to get shopkeepers to hand her the amount that she says is short.

Christine, who has a shop at Pasir Ris Drive 6, sent to Stomp CCTV footage that showed the incident that occurred on Nov 18.

The elderly woman can be seen asking for a packet of cigarettes, and pays with a $50.

The cashier hands her four $10 notes, and the elderly woman asks for a plastic bag.

When the cashier turns to take the bag, she pockets a $10 note and allegedly tells her that the change is short.

The elderly woman also pretends to search for the note, suggesting that she dropped it near the cash register.

According to Christine, after doing this at her store, the elderly woman then went to a wet market nearby but failed to pull off the same trick.

"A friend who from a coffeshop in Paya Lebar got conned by her," said Christine.

"It is the first time I have seen her here, so she might be travelling to different places to try this.

"Also shared the clip on a WhatsApp chat group for shopkeepers, and have lodged a police report," the Stomper added.

Related Stories
S'pore guy loses iPad and is shocked to learn it was picked up by guy in Philippines -- who begs him for Apple ID password
S$1,000 cash belonging to S'pore bloggers goes missing at Bali villa -- and their holiday only gets worse
Man spends $12,000 on Thai club hostess with credit card stolen from property tycoon
scam
con
woman pockets change