Youths treat public carpark like their own playground, climbing over cars and spray-painting walls 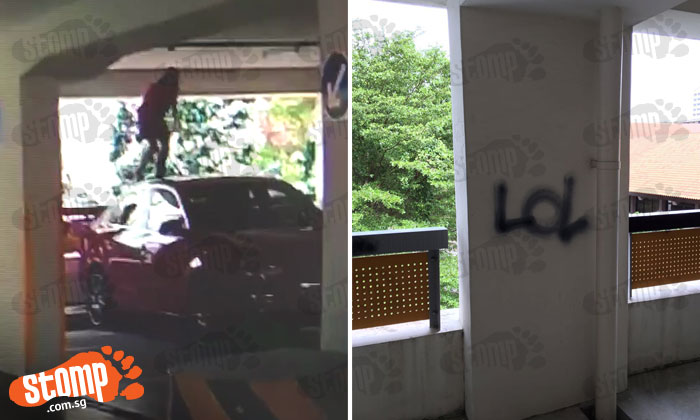 Stomper Hakida was appalled at the antics of a group of youths at his neighbourhood's carpark.

His neighbour had noticed scuff marks on his car and appealed to Hakida for video footage as he noticed that his dashboard camera was on and might have caught what had happened.

"My neighbour, the owner of the red car, left a note on my car to ask me for the video footage."

Upon reviewing the footage on his personal computer, Hakida was shocked to see a group of youths running amok around the carpark, climbing over his neighbours car and spray painting on the walls and floor of the carpark.

Some of the vandalism included crude language and drawings.

Fortunately, he managed to share the footage with his neighbour who has since reported the matter to the police.

Sharing his feelings on the matter, Hakida said:

"I'm frustrated. They shouldn't be doing all this.

"It's like the foreigners who were caught vandalising the trains.

"Do they know that they will be punished if they are caught?"