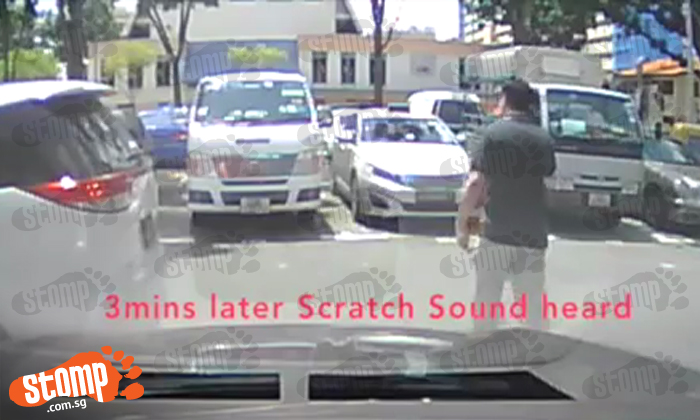 Stomper George found a big scratch on his car at a carpark in Whampoa, near Block 88, on July 29.

According to the Stomper, just before that, he had been waiting for a parking lot when a Honda driver came by eyeing the same spot.

However, he did not give in to the driver.

George, who contributed a video of the incident, said:

"This happened on July 29 during lunch hour, at Whampoa open market behind Block 88.

"Waited for a parking lot and SKD245J came later wanting to take the lot. But I didn't give in to him so he must be very angry.

"Three minutes after parking, my car was intentionally scratched by someone with a bunch of keys in his left hand.

"The walking path is just two cars away so the person had purposely walked past my car to scratch it.

"Everything has been captured by my car camera."

In the video, a scratching sound can be heard. A man is also then seen walking by the Stomper's car while holding keys in his hand.

George, who has since made a police report, also shared a photo showing the damage on his vehicle.

In addition, he is appealing for anyone with additional video footage of what happened to come forward.

More About:
crime
caught in the act
dispute
parking