Cats kept in cages along Sembawang corridor are strays being fostered by resident: Town council 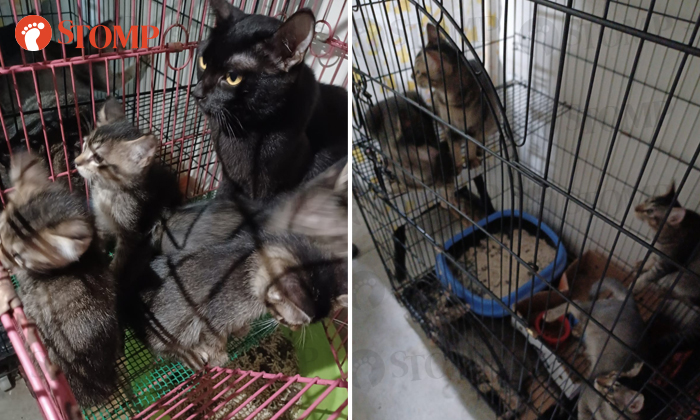 Cats seen kept in cages along a Housing Block (HDB) corridor in Sembawang are strays which are being fostered by a resident and waiting to be rehomed, said the town council.

The town council's response comes after a member of the public expressed concerns over the cats on the 18th floor of Block 462 Sembawang Drive.

Stomper Kitty Cat shared photos and a video of the felines along the corridor and said they were being kept in "filthy cages with uncleaned litter boxes".

The Stomper said: "A man has been repeatedly caging many cats and kittens along the corridor of his rental unit.

"His previous acts in 2021 resulted in the authorities giving him only a verbal warning, which has clearly fallen on deaf ears. No further action was taken by the relevant authorities.

"This time, the caged cats were first highlighted by a delivery person who sought the advice of users in cat groups on Facebook."

According to Kitty Cat, "a few concerned individuals" have visited the site since April 21.

The Stomper added: "The cats were seen meowing in distress in the filthy cages with uncleaned litter boxes. There is even a nursing mother cat with newborns."

In response to a Stomp query, Sembanwang Town Council said it is aware of the case.

A spokesman said: "The resident is working with Cat Rescue Society to rehome stray cats. He has also informed us that he will be removing the cages after he has rehomed the current batch of cats he is fostering."