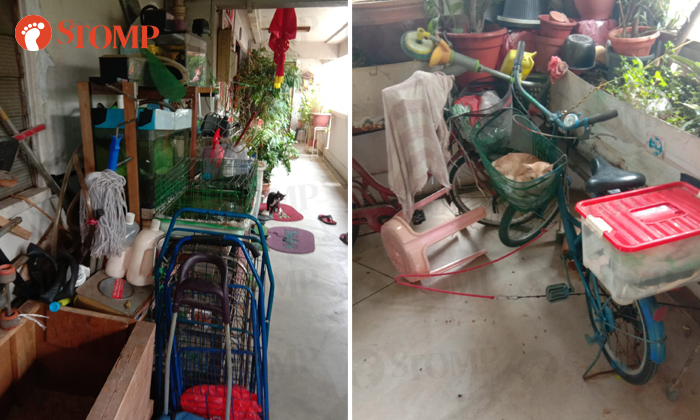 A woman has raised a stink over her neighbour cluttering the common corridor with bulky items and failing to clean up after pets properly.

Stomper Nina, a resident at Block 613 Yishun Street 61, shared photos of the situation on the third floor.

She told Stomp: "There are four cats tied to a string at the common corridor. There are also two fish tanks and big burning tins.

"The smell from the cats is really strong and the foul stench covers the entire corridor. 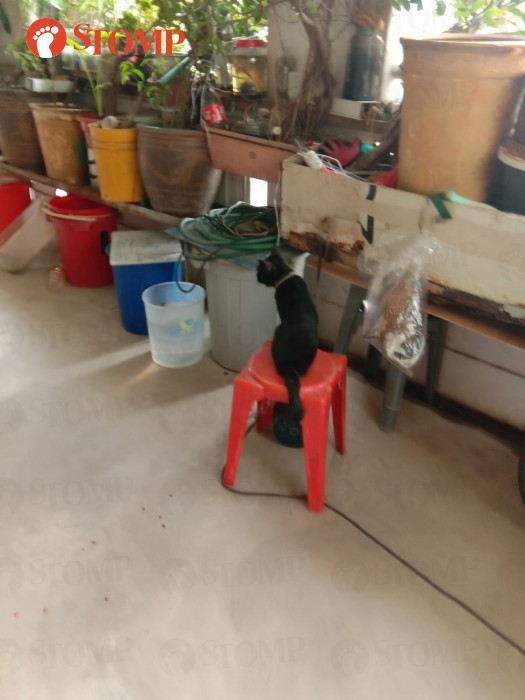 "This has been happening for the past few years. How is this even allowed? Isn't it illegal to have cats this way?

"I feel that this is so inconsiderate to other residents, especially in a pandemic where cleanliness is the most important.

"The common corridor should not be misused in this way. This is also a hazard in the event of a fire emergency."

In response to a Stomp query, a spokesman for Nee Soon Town Council said it is aware of the situation at the block.

"After receiving feedback from a resident, the Nee Soon Town Council Property Team conducted a site visit," added the spokesman.

"Upon investigation, the town council served an advisory to the resident to remove the items obstructing the common corridor.

"After the advisory was served, the resident cooperated in removing some of the items which were obstructing the corridor.

"We will continue to work with the resident to further reduce the items at the corridor, and to ensure a clear pathway.

"The town council would like to seek the cooperation of residents to keep common areas such as corridors and staircases clear of obstruction.

"Common areas should not be cluttered with items such as bulky articles, bicycles, flower pots, and other household items etc. lt will hamper smooth evacuation in an emergency (e.g. the conveyance of patient on an ambulance stretcher during a medical emergency). Some of these items are potential fire hazards and will endanger the safety of all residents.

"The town council will also engage the cat owner to promote responsible cat feeding practices and to clean up after the cats."