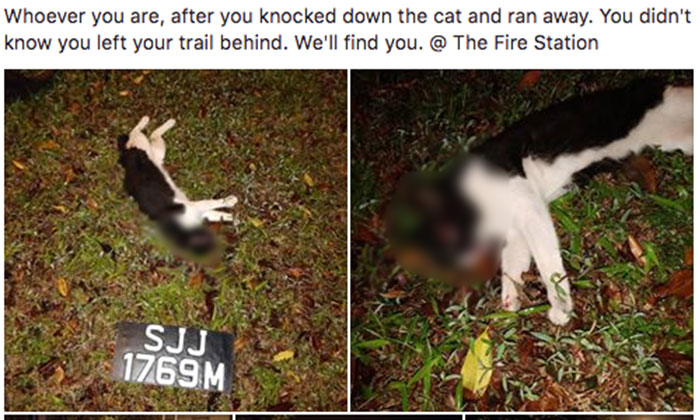 A cat was killed in an alleged accident along Upper Bukit Timah Road, towards Clementi, late Saturday night (April 14).

Strangely, a licence plate was left behind at the scene.

A Facebook user also posted photos of the incident and wrote in his caption: "Whoever you are, after you knocked down the cat and ran away.

"You didn't know you left your trail behind. We'll find you."

The Society for the Prevention of Cruelty to Animals (SPCA) told Coconuts Singapore that its Animal Rescue team was deployed to the area after it was alerted to the incident at around 11.45pm.

When the team reached the scene, they found a dead cat and a licence plate.

It is unclear if there will be any action taken by authorities, as felines are not covered under the Road Traffic Act.

Enacted in 1963, the Road Traffic Act states that a motorist commits an offence when he runs over an animal but does not stop to help.

However, it also defines an animal as "any horse, cattle, ass, mule, sheep, pig, goat or dog", which means running over cats isn’t covered under Singapore’s traffic violations.

Related Stories
Woman who got son to abandon 5 cats at Rivervale Crescent void deck fined
Motorist drives off after hitting dog and sending it flying, police report made
Dog dies after being stuffed into overhead bin on United Airlines flight
More About:
animal abuse
hit-and-run
accident